An unlikely leader has emerged in one of the New England Patriots’ most important roster battles.

Through three days of open training camp practices, offensive lineman Jermaine Eluemunor appears to have the inside track on the starting right tackle spot previously held by Marcus Cannon.

Cannon, who battled cancer early in his NFL career, opted out of the 2020 season due to COVID-19 concerns.

?I?ve played a ton of positions in my entire three-year career in the NFL, from left tackle to left guard, right tackle, right guard,” Eluemunor said in a video conference after Wednesday’s practice. “So I?m familiar with all four of those positions.”

The Patriots used Eluemunor at guard last season after acquiring him in a late-August trade with the Baltimore Ravens, and he played sparingly, logging just 29 offensive snaps while James Ferentz served as the team’s top interior O-line reserve.

When Cannon opted out, Eluemunor was not viewed as a likely candidate to replace him, with most speculation centering around tackles Yodny Cajuste, Korey Cunningham and Justin Herron, left guard Joe Thuney or a potential free agent addition.

Eluemunor does have tackle experience, though. He was a right tackle during his final season at Texas A&M, and he played 89 snaps at left tackle with the Ravens in 2018, according to Pro Football Focus.

At 6-foot-4, 335 pounds, Eluemunor also is significantly larger than most Patriots interior linemen, though he said managing that weight was a point of emphasis for him this offseason.

“I just wanted to feel comfortable at the weight I was,” the 25-year-old said. “Being able to play the positions I do, I wanted to make sure that whatever happened, wherever I ended up, that I didn?t have to worry about my weight and have to do extra things like I have the last couple years of my career.”

With coronavirus precautions keeping him away from the Patriots’ facility — and his preferred local gym — this spring, Eluemunor bought a rowing machine and went for runs and walks to work on his conditioning. He also used the extra time at home to “really dig into the playbook” after having to learn it on the fly last September.

“From conditioning to the mental part of the game to the physical part, there wasn?t one thing that I didn?t try to improve on this offseason, because I feel like I can improve on a lot of things,” Eluemunor said. “So (I put) a big emphasis on everything — coming back in shape, at the correct weight and ready to go mentally.”

He added: “Obviously, I feel better this year having more time (in the Patriots’ system).”

Eluemunor isn’t the only Patriots lineman who could take on a larger role this season. With little depth behind starting center David Andrews — who sat out all of last season with blood clots — they’re tapping into second-year pro Hjalte Froholdt’s versatility.

Froholdt, a 2019 fourth-round draft pick who spent his rookie year on injured reserve, primarily played guard at Arkansas and for the Patriots last summer but made three starts at center as a college senior.

“You have to be able to do as much as you can for the team, and I want to play wherever they want to put me,” Froholdt said Wednesday. “I want to do the best just for the team. Wherever they put me right now, I?m going to go in and do my best job. If that?s center or wherever, it doesn?t matter. I?m just going to put my best foot forward and try to do the job to the best of my ability.”

Cajuste made his long-awaited Patriots practice debut a week ago and appears healthy after rehab from quad surgery wiped out his entire rookie season, but the 2019 third-rounder does not look like an immediate contender for Cannon’s vacated spot.

The West Virginia product acknowledged he’s a bit rusty after a year away from the field.

“Honestly, coming off an injury, you are never going to just be back where you left off,” Cajuste said. “There is obviously — you are going to have to work back to get to where you were. So I?m just taking it each day at a time and just getting better and better. Moving on, crisping up everything and moving that way.” 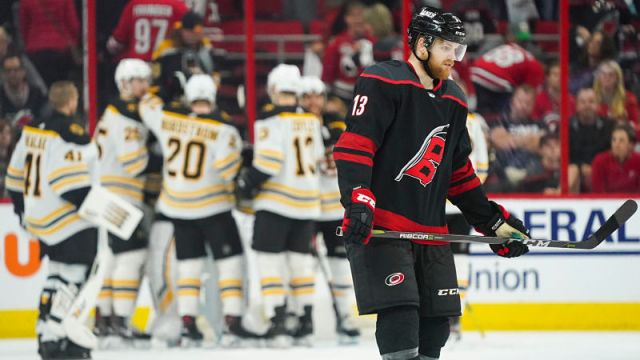 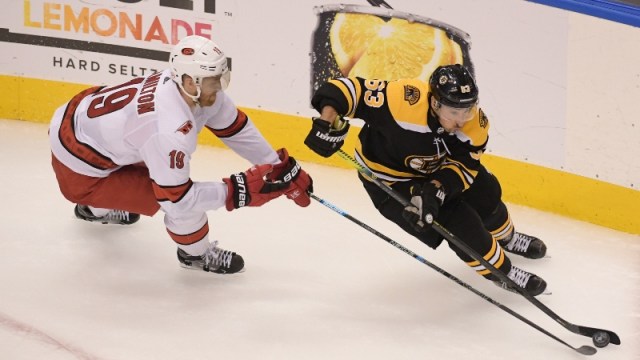 What Time Is Bruins-Hurricanes Game 5? NHL Moves Back Puck Drop