All game Saturday, the trio of Nick Ritchie, David Krejci and Craig Smith overwhelmed the Buffalo Sabres. They were rewarded by finding the back of the net twice in the third period to give the Bruins a 3-2 comeback victory over Buffalo.

It really is a perfect combination. Ritchie loves to use his big frame to get to the net, while Krejci is one of the more gifted playmakers in the NHL. Smith loves to shoot and get to the net himself.

And down 2-1 just over five minutes into the third, Ritchie was on the doorstep to score the equalizer. Smith scored the winner with 3:50 to play while collecting loose change.

Bruins head coach Bruce Cassidy put that trio together to start training camp, and has gone back to it when able. It’s paying off.

It was a foregone conclusion almost that they would crack Buffalo netminder Linus Ullmark at some point. They finished with a 13-1 shots advantage 5-on-5 in the 11:12 they were on the ice together.

That’s a performance the Bruins will accept every game.

— Ritchie’s goal was the product of a simply incredible shift from Charlie McAvoy.

After hopping off the bench, McAvoy gained the puck in the offensive zone and just skated circles, literally, around Buffalo. He ended up throwing the puck toward the net, and Ritchie was there to bury it.

It was a shift that should be shown to voters when it comes time to cast Norris Trophy ballots.

McAvoy admitted that he was actually looking to make a seam pass to Smith on the play, but it worked out anyways.

— With Tuukka Rask out, it was clear heading into a weekend back-to-back that Jaroslav Halak would not start both games.

Dan Vladar ended up getting the call for Saturday. And outside of a giveaway two minutes into the game that led to a Buffalo goal, the 23-year-old was solid.

“I thought he responded well from (the first goal),” Cassidy said. “You don’t know with a young guy if he’ll sort of get in his head or park it. But I thought he did a good job parking it, made some good saves for us. I don’t think he had to make a ton of stops in there, but he made the ones he’s supposed to. … All in all I thought he had a really strong game.”

The 23-year-old hadn’t played since fracturing his hand back on Feb. 21. Lauzon had been practicing this week, but Cassidy on Friday said he was hoping to get Lauzon more practice reps — something that is tough to do with such a compact schedule.

But Lauzon took warmups and ended up playing in place of Jarred Tinordi.

Skating on the third pairing with Stephen Kampfer, Lauzon logged 18:32, including 3:30 on the penalty kill.

— With Brad Marchand being a late scratch and ending up on the COVID-19 list, Trent Frederic was a last minute addition to the top line.

Cassidy didn’t shelter Frederic, who played on the left wing, trotting the 23-year-old out for 17:30, including 2:14 on the power play.

— Marchand wasn’t the only one to end up in the COVID-19 protocols.

Assistant coach Kevin Dean was not on the bench Saturday, and Cassidy revealed that Dean was considered a close contact. He won’t be behind the bench Sunday, either. 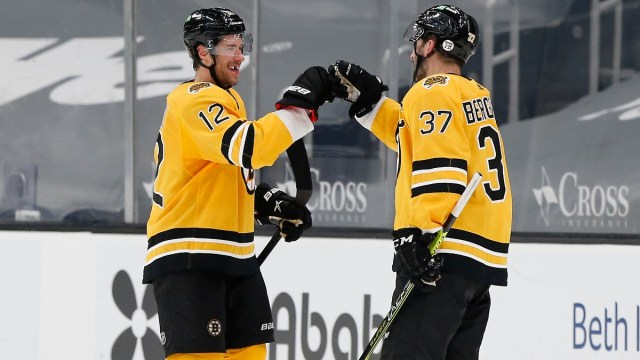 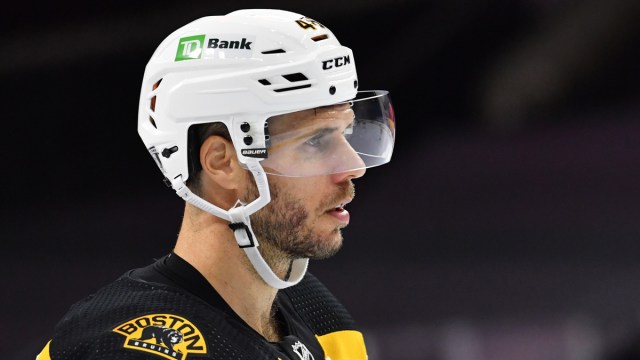