Countrymen stick together. Even if they’ve never met, apparently.

Fernando Tatis Jr. and Rafael Devers both are in Denver representing the Dominican Republic in the Major League Baseball All-Star Game, and the San Diego Padres superstar gassed up the Boston Red Sox third baseman during a media availability at Coors Field on Monday.

Devers was pretty flattered, to say the least.

“He’s a great hitter and totally a great baseball player,” Tatis Jr. told reporters Monday, per Chris Smith of MassLive. “It’s one of those guys that has changed the game, has embraced the game. He’s totally one of the best players right now.”

At 24 years old, Devers makes his first All-Star team while heading into the break with a .282 batting average and .913 OPS with 22 home runs, 25 doubles, a triple and 72 RBIs in 87 games this season. Tatis, meanwhile, is one of the most exciting players in Major League Baseball.

Tatis will start for the National League at shortstop, but the duo potentially will have a chance to play on the same team in the next World Baseball Classic.

“We haven’t had much time to talk to each other but I’m definitely looking forward to (talking this week),” Tatis said of Devers. “He’s one of those guys that I know we’re going to play together in the World Baseball Classic. And it’s one of those guys that brings the baseball world up in the Dominican Republic. I’m totally looking forward to talking to him a little more.”

The high praise got back to Devers, who was thrilled to be on Tatis’ radar.

“It makes me really excited to hear someone like a superstar like Fernando Tatis Jr. even mention my name,” Devers said, translated through ESPN’s Marly Rivera, per MassLive. “And this (Home Run) Derby and the All-Star Game, we all know is about (Shohei) Ohtani and Tatis. So just the fact that he is saying the name Rafael Devers is very exciting.”

The All-Star game is scheduled for Tuesday night at 7:30 p.m. ET. 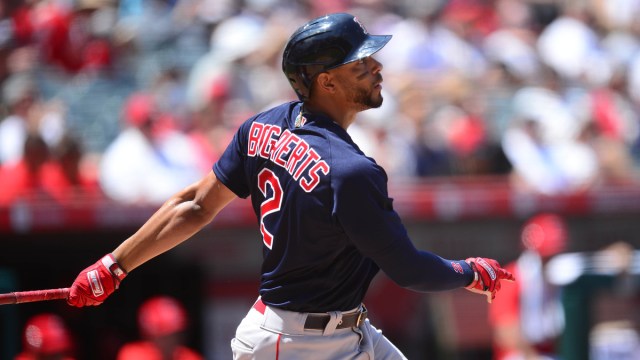