There’s a pinpoint moment where everything changed for Al Horford in Game 4 between the Milwaukee Bucks and Boston Celtics.

It came just two minutes into the third quarter when Bucks star Giannis Antetokounmpo threw down a one-handed slam over Horford. Antetokounmpo celebrated his dunk by glaring at Horford and flexing his muscles.

Horford, a 15-year NBA veteran, didn’t take kindly to the disrespect, as Antetokounmpo received a technical foul for the display. Horford nodded his head repeatedly back in Antetokounmpo’s direction as if Horford already knew what was going to happen next.

That set everything into motion for Horford, who was the catalyst in Boston’s 116-108 victory over the Bucks at Fiserv Forum on Monday night. Horford poured in 16 of his 30 points — a career-best mark in the postseason — in the fourth quarter and explained following the win how that situation with Antetokounmpo ended up being a turning point for him in the game.

“I don’t really know what we he said to me, but the way he was looking at me and the way that he was going about it really didn’t sit well with me,” Horford said. “At that point, I think just something switched with me in the game.”

Horford, who shot 11-for-14 from the field and played an eye-popping 42 minutes, exacted revenge on Antetokounmpo with his massive performance in the fourth quarter, including reversing roles with the Greek Freak on a dunk of his own.

Early in the final frame, Horford beat Antetokounmpo off the dribble from the right wing and threw down a thunderous slam dunk while being fouled by Antetokounmpo. It was now Horford’s turn to flex and he knocked Antetokounmpo down as he finished off his dunk and celebrated. Horford also earned a technical foul following the play.

For Horford, it was a somewhat unusual sight to see the emotion pour out of him like that, but Antetokounmpo and the playoff atmosphere certainly brought it out of him.

“I usually just kind of go about my business, and I do get excited,” Horford said. “I guess you kind of pick your spots, your moments, and this was an emotional game.” 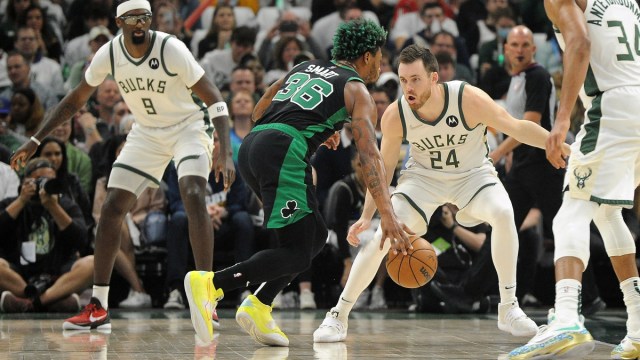 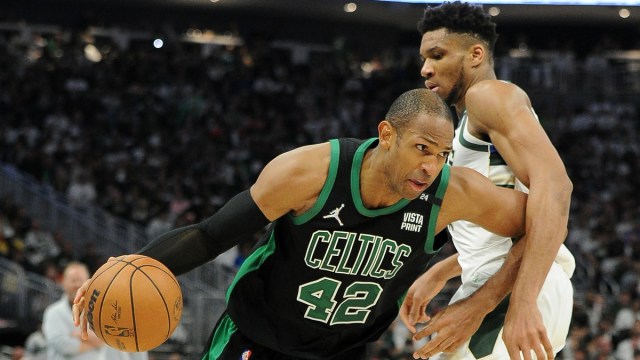