Joe Mazzulla apparently has the full support of the Boston Celtics behind him as the interim head coach while Ime Udoka serves his season-long suspension for violating several team guidelines.

Mazzulla is taking over during a less-than-ideal time, but team owner Wyc Grousbeck and president of basketball operations Brad Stevens expressed their confidence in the Rhode Island native Friday during a press conference addressing Udoka’s suspension.

The 34-year-old Mazzulla doesn’t exactly have a clean past himself, but Grousbeck and Stevens said Friday they are ready to give Mazzulla a chance as the head coach.

“Joe’s going to be in charge,” Stevens said during a press conference. “It’s not easy timing for him or the rest of the staff, but he’s an exceptionally sharp and talented person. I believe strongly in him and his ability to lead people and his ability to galvanize a room and get behind him. And his ability to organize and understand all that comes with running a team during the season. He’s got really good help on his staff ?- Damon Stoudamire and Ben Sullivan — those two guys are critical.

“I probably know Joe the best,” he told reporters during the televised news conference. “This season on the road in the playoffs, we spent more time together with dinners and whatnot, and he’s just passionate. He’s filled with passion and energy.”

It’s unclear if Mazzulla will have the interim dropped from his title after this season as the Celtics have yet to decide what happens to Udoka after 2022-23.

The Celtics begin training camp Tuesday as they get set to defend their Eastern Conference title and will need to do everything they can to block out any and all distractions.

Plot Twist: Could Ime Udoka Coach Team Other Than Celtics THIS Season? 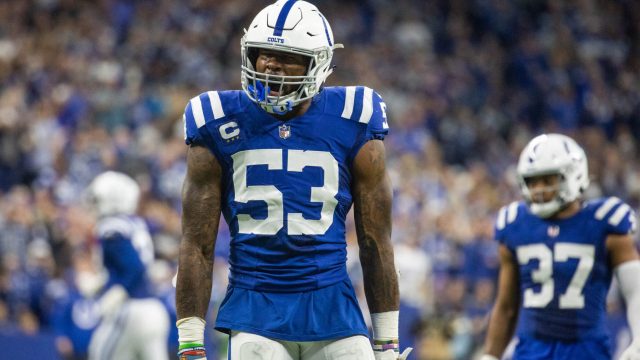 Colts LB Shaquille Leonard Ruled Out for Sunday vs. Chiefs