FOXBORO, Mass. — Mac Jones authored the lasting image of the Patriots’ dispiriting Thursday night loss to the Bills, and not in a good way.

After New England’s 24-10 loss to Buffalo, Amazon ran a video of Jones yelling expletives during a heated sideline outburst. It’s unclear whom the Patriots quarterback was shouting at, but many assumed the tirade was directed at offensive play-caller Matt Patrica. Additionally, amateur lip readings indicate Jones yelled “throw the f—ing ball” and that either the running game or short game “sucks.”

Jones opened his postgame news conference by taking a question on the video. He offered a surprisingly honest answer.

“Obviously just kind of let my emotions get to me,” Jones said. “But, we’re kind of playing from behind. What I said was about throwing it deeper (instead of) the short game. I’ve gotta execute that part better, but it’s the short game that we kept going to — which was working. But I felt we needed chunk plays, and I shouted that out to kind of get everyone going. And that’s emotional, that’s football. I’m passionate about this game. Obviously, you don’t want to let your emotions get the best of you.

“Yeah, I think that’s pretty much it. It wasn’t directed at anybody, just emotion coming out. We kind of needed a spark. When you’re playing from behind against a really good team and offense, you need to go out there and make better plays. And that starts with me. Definitely wasn’t good enough by me tonight.”

Jones, who threw for 195 yards and one touchdown in the losing effort, later was asked whether he has the ability to switch to the plays he wants at the line of scrimmage. His answer, again honest, seemingly confirmed that he indeed was yelling at Patricia.

“At that point in the game, it was just like, ‘All right, we’re playing catchup here, let’s just go for it, let’s be aggressive, let’s take those shots, let’s just go down fighting,’ ” Jones said. “And Matty P was on the same page, and we kind of did that at the end there and moved it a little bit more.

“At the end of the day, we’ve gotta execute the plays and do a better job. But sometimes you’re just so competitive, right? You wanna go out there and, ‘Hey, let’s get a 50-yard gain.’ And sometimes it doesn’t happen, but we might as well go down trying and try and make it work.”

Jones wasn’t the only player clearly frustrated with how the offense played against the Bills.

Receiver Kendrick Bourne was alarmingly forthright, calling out both the offensive line and the play-calling. Bill Belichick largely gave non-answers when asked about play-calling during his postgame news conference, repeatedly saying the Patriots need to do a “better job” overall.

New England now is 6-6 with five games remaining on its schedule. The Patriots will look to rebound when they visit the Arizona Cardinals for the Week 14 edition of “Monday Night Football.” 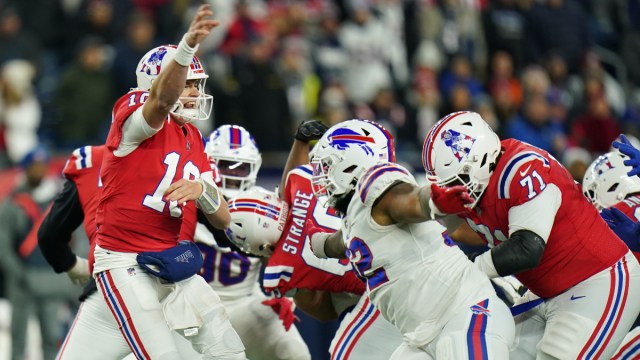 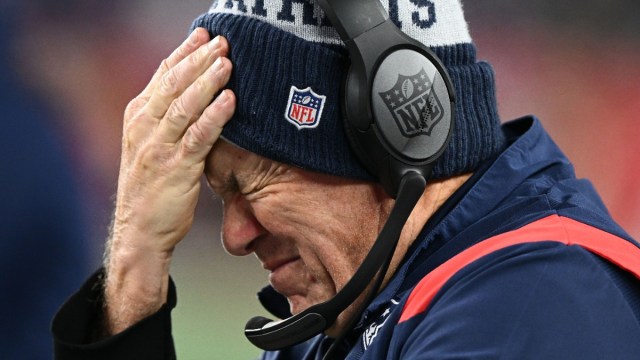