The fantasy football running back roster is growing thinner by the day.

With the likes of LeSean McCoy, Carlos Hyde, Eddie Lacy and James Starks injured, plus Jonathan Stewart and Ezekiel Elliott on bye weeks, you’re probably looking for someone to fill in on your fantasy football rosters.

Here’s a look at a few of the best options still available.

Mike Gillislee, Buffalo Bills
McCoy left Wednesday’s practice with hamstring tightness, and with a history of hamstring injuries that sidelined him as recently as last season, there’s cause for concern. Gillislee has been the primary backup for McCoy this season, and his role has been increasing for a few weeks. He has 17 carries for 116 yards and two touchdowns, plus three catches for 27 yards and another score. He’s currently owned in less than five percent of leagues.

Mike Davis, San Francisco 49ers
Davis doesn’t have the upside that Gillislee does, but with Hyde expected to miss Sunday’s game, he’ll be the primary backup over Shaun Draughn. Davis out-snapped Draughn 24-5 after Hyde’s injury in Week 6.

Ty Montgomery, Green Bay Packers
So he’s not a running back, but he stepped into Davante Adams’ No. 3 receiver role and shined in Week 6, collecting a team-high 10 catches on 12 targets for 98 yards. He fumbled twice, losing one, so that’s obviously not encouraging, but the Packers need someone to produce right now. Recently acquired Knile Davis probably won’t know the entire playbook, so while he’s the Packers running back to own, we don’t really trust him this week. If you can move another running back into a starting spot and use Montgomery as a flex instead, it’s not a terrible option.

Jacquizz Rodgers, Tampa Bay Buccaneers
Rodgers is clearly capable of handling the rock, as evidenced by his Week 6 line: 101 yards on 30 carries plus five catches for 28 yards. He’ll face a terrible 49ers defense this week, which is encouraging. He’s available in nearly 70 percent of leagues.

Bilal Powell, New York Jets
While Forte’s production has slowed, Powell has slowly been gaining more and more looks in the passing game. He already has 24 catches for 156 yards this season, and he’s tacked on 119 yards rushing on 20 carries. He’s yet to score this season, but he had three double-digit fantasy games in PPR formats prior to Week 6’s stinker from the Jets as a whole. With Geno Smith taking over under center, Powell could benefit in both check down and running situations. He’s owned in less than 50 percent of leagues. 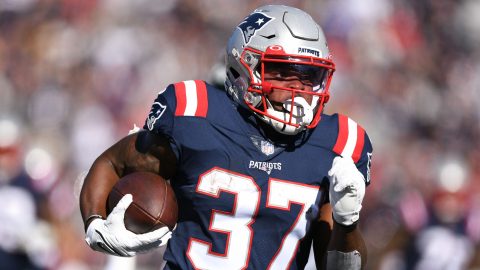