After a couple nice weekends of intriguing matchups, we’re right back to a big bag of garbage facing us on the NFL schedule.

Sure, the Arizona Cardinals visit the Seattle Seahawks in a matchup for NFC West supremacy, and the New York Jets host the Buffalo Bills on Thursday night with crucial AFC playoff implications. Beyond those games, though, you have to be quite the grid geek to get psyched for the Week 10 slate.

NESN.com’s panel of experts still is picking away, though, and actually is looking forward to a few of these games, too, because there’s nothing better to do.

Let’s check out our Week 10 picks.

THURSDAY, NOV. 12
Buffalo Bills (4-4) at (-2.5) New York Jets (5-3), 8:25 p.m. ET
Ricky: Jets. Is there anything more painstaking than picking an AFC East game not involving the Patriots? So much volatility week to week from these teams. Tyrod Taylor attempted just 12 pass attempts last week as the Bills stomped the Dolphins. He’ll need to do more this week given that the Jets own the NFL’s top run defense, and it’ll be even harder with Bills running back LeSean McCoy ailing.
Ben: Bills. As road underdogs against the Jets, Buffalo is 7-3 ATS in its last 10. The Bills also are getting healthy, and the Jets haven’t had an ATS victory since Oct. 18.
Mike: Jets. Rex Ryan’s return to the swamp will have his team all kinds of fired up, but I’m buying into the trends here. The home team is 5-1 against the spread the last six times these clubs have met, which should be even more prevalent on a Thursday night.

SUNDAY, NOV. 15
Jacksonville Jaguars (2-6) at (-5.5) Baltimore Ravens (2-6), 1 p.m.
Ricky: Jaguars. The Lions (1-7) are the only team worse than the Ravens (1-6-1) against the spread this season. And Detroit pretty much just fired all of its employees outside of head coach Jim Caldwell.
Ben: Jaguars. I’d really rather not spend too much time thinking about this game, other than state that Jacksonville has some things going on I sort of like, especially offensively, while the Ravens do not.
Mike: Jaguars. The Ravens are 1-9-0 against the spread in their last 10 games as favorites. Good enough for me.

Detroit Lions (1-7) at (-13) Green Bay Packers (6-2), 1 p.m.
Ricky: Packers. Green Bay’s issues were exploited the last two weeks against Denver and Carolina. Detroit is neither of those teams. In fact, the Lions suck big time. Give me Aaron Rodgers and Co. at Lambeau Field in a blowout.
Ben: Packers. Just did a quick audit and discovered I haven’t taken the Lions once all season. We might have discovered the reason I’m in first place.
Mike: Packers. The Packers lost two games, on the road, against really good teams. Now they’re back home against an awful team. Nothing to worry about.

Miami Dolphins (3-5) at (-7) Philadelphia Eagles (4-4), 1 p.m.
Ricky: Eagles. Miami’s heart was ripped out of its chest a couple of weeks ago in New England. The Dolphins’ offense has been sloppy of late, and the Eagles’ defense is very opportunistic.
Ben: Eagles. It’s an open question which versions of these teams will show up from week to week, but I’m pretty sure Philly is just inconsistent while Miami is just plain bad again.
Mike: Eagles. I’d like this spread much more if it was 6.5, but what can you do? Also, for some reason, Philly loves November games, going 8-1 ATS in November under Chip Kelly.

Cleveland Browns (2-7) at (-4.5) Pittsburgh Steelers (5-4), 1 p.m.
Ricky: Browns. Assuming Josh McCown plays. The Steelers are really banged up, as even DeAngelo Williams is dealing with a foot issue this week. Pittsburgh will win, but it should be tight.
Ben: Steelers. How in the world does one analyze the numbers for this matchup? Lots of people said nice things about Johnny Manziel after last Thursday’s game, but in the end, he went 15-of-33 passing for 168 yards and directed an offense that mustered 10 points. Manziel is terrible, folks.
Mike: Steelers. Pittsburgh won’t have Ben Roethlisberger, but it badly needs to win this game to keep pace in the AFC. The Browns also have the NFL’s worst rushing defense, and DeAngelo Williams is averaging 5.3 yards per carry.

Chicago Bears (3-5) at (-7.5) St. Louis Rams (4-4), 1 p.m.
Ricky: Rams. This is the week the Bears will feel the loss of Matt Forte.
Ben: Rams. It took Jay Cutler more than a half of football to realize he could pass at will on San Diego’s secondary, as long as he didn’t just up and give the ball away. I don’t have confidence in him weathering a similar storm against St. Louis’ defense.
Mike: Bears. Might be buying too much into recent history here, but teams are starting to load up the box against Todd Gurley. I expect the same Sunday, which should keep this game close.

Dallas Cowboys (2-6) at (-1) Tampa Bay Buccaneers (3-5), 1 p.m.
Ricky: Bucs. The Bucs are terrible at building on wins. But they’re also really good at bouncing back from losses. Tampa Bay is 7-1 against the spread in its last eight games after an against-the-spread loss. And guess what? The Bucs got whooped last week. Plus, the ‘Boys will do something stupid, like let Greg Hardy continue to play for their team.
Ben: Cowboys. Matt Cassel’s customary pick-six won’t prevent the ball from moving as the Cowboys nab their first win without Tony Romo.
Mike: Cowboys. Neither of these teams are very good!

(-4.5) Carolina Panthers (8-0) at Tennessee Titans (2-6), 1 p.m.
Ricky: Titans. Calling the upset. Trap game.
Ben: Panthers. The Titans scored a surprise victory over the Saints last week, but giving teams credit based on what they did against the Saints is a bridge I’m not prepared to cross.
Mike: Panthers. This has letdown game written all over it, but whatever. It should be relatively close, but it just feels like this is a game where a late score gives the Panthers the cover.

New Orleans Saints (4-5) at (EV) Washington Redskins (3-5), 1 p.m.
Ricky: Saints. New Orleans’ defense blows, but Washington’s offense (28th in the NFL with 19.8 points per game) isn’t exactly setting the world on fire this season.
Ben: Redskins. Washington’s 3-8 ATS in its last 11 home games, which would seem to bode well for New Orleans. But the ‘Skins also are 3-1 straight-up at home this season, and since this one’s a pick ’em, I’m going with them.
Mike: Redskins. Washington might have given the Patriots at least something of a game if it, you know, caught the football. The ‘Skins should have plenty of chances to redeem themselves against a porous New Orleans defense.

Kansas City Chiefs (3-5) at (-7) Denver Broncos (7-1), 4:25 p.m.
Ricky: Broncos. The Chiefs’ two-game winning streak is encouraging. Until you consider they beat the Ben Roethlisberger-less Steelers and the embarrassing Lions. Expect a rebound from the Broncos.
Ben: Broncos. That’s a lot of points to give a Chiefs squad that covered in its last two games against a Denver group that was brutal in Indy, but K.C. typically is just dreadful ATS, particularly on the road.
Mike: Broncos. Peyton Manning has dominated the Chiefs since joining the Broncos, throwing 19 touchdowns to just four interceptions with a 7-0 record.

(-8) New England Patriots (8-0) at New York Giants (5-4), 4:25 p.m.
Ricky: Patriots. Don’t give me any of that crap about Super Bowls. The only one worth considering here is the one New England is marching toward.
Ben: Patriots. Sure, the Patriots are undefeated, but this isn’t the Super Bowl, and David Tyree is nowhere to be found.
Mike: Patriots. If the Giants had the same sort of pass rush they’ve had in recent years, this might be more of a concern

Arizona Cardinals (6-2) at (-3) Seattle Seahawks (4-4), 8:30 p.m.
Ricky: Cardinals. Both teams are coming off byes for a well-rested show-me game in the shadows of Puget Sound. This game means more for the Seahawks, but I’ll take the free field goal and what I still think is the better football team.
Ben: Seahawks. The list of teams the Seahawks have beaten ATS this season is as follows: Chicago and San Francisco. The Cards haven’t exactly faced a murders’ row of opponents, though, and they’re 1-4 ATS in their last five in Seattle. (Side note: Do bodies of water cast shadows, Ricky?)*
Mike: Seahawks. Toughest pick of the week. For me, it comes down to this: Arizona’s six wins have come against teams that are a combined 15-36; its two losses come against teams that are a combined 9-8.
*Ricky’s rebuttal: Kick rocks, Ben.

MONDAY, NOV. 16
Houston Texans (3-5) at (-12) Cincinnati Bengals (8-0), 8:30 p.m.
Ricky: Bengals. Just like last week, I saw the point spread and immediately wanted to pick against the Bengals. And just like last week, I quickly changed my mind based on the matchup. The Bengals are rolling right now, and the Texans are just too one-dimensional to put up a fight in Cincy’s barn.
Ben: Bengals. The Tiggers have feasted on mediocre quarterbacks, beating teams led by Johnny Manziel, EJ Manuel and Alex Smith by 21, 13 and 15 points, respectively, since the beginning of October. Brian Hoyer fits in nicely on that list.
Mike: Bengals. Apparently the cure to Andy Dalton’s prime-time bugaboos is to have him play Cleveland and Houston at home in consecutive weeks. 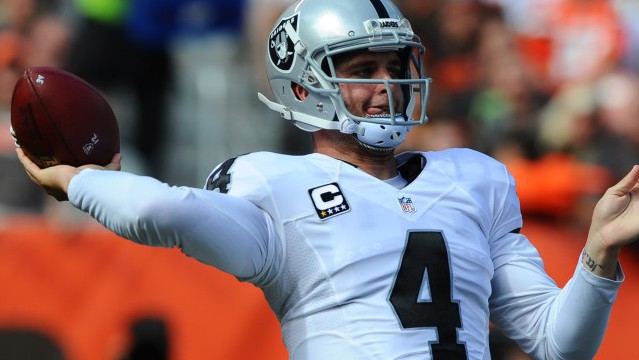 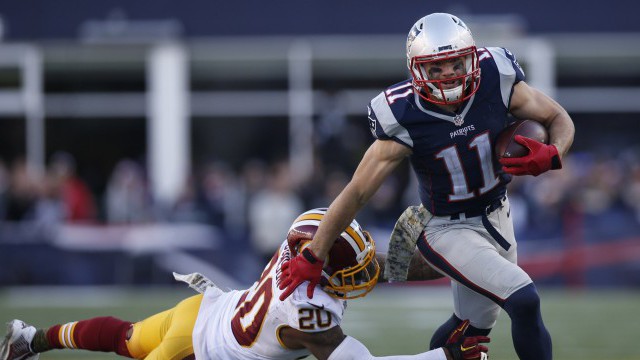