After a four-day break, the Bruins will host the Maple Leafs on Thursday night at the Garden. But don't let Boston's 7-2 thrashing of the Leafs on Saturday night fool you.

Yes, Toronto suffered an ugly loss to the B's, but these Leafs aren't the same sorry crew they were at the beginning of the season — they have actually won six of their last eight games.

Aside from the beating Boston gave them last Saturday, there isn't much that Leafs fans can complain about these days. As Leafs blogger Grant Tomkins of Pension Plan Puppets points out, the Buds are rolling through all four lines and keeping their young legs fresh throughout all 60 minutes in an attempt to outskate their opponents. The fast-paced game is not only exciting for the fans, but it's paying off in the wins column.

As KesselMania II approaches, Tomkins once again fills us in with what's happening in Maple Leafs country.

NESN.com: How is Toronto viewing Phil Kessel’s reaction to his much-anticipated return to Boston? Did the youngster handle himself well?

G.T.: In a word, no. The entire team seemed to fall apart that game, and to me, it appeared as if Phil was trying to do it all just to prove himself. By doing that, he was isolating the team from him, and in turn, feeling kind of alone in Boston. Coach Ron Wilson attempted to take some of the load off his shoulders by noting that the entire team didn't play well for him. He also noted that no one player can do it alone, and that the Leafs need to work more as a unit. I'm hoping the team heard him.

NESN.com: How would Toronto fans have welcomed him back if the tables were turned?

G.T.: Considering Mats Sundin was given a standing ovation upon his return after signing with the Canucks, I think he'd be well-received. Understandably, Kessel left [Boston] under slightly different circumstances, but I don't think it was any less acrimonious. That said, I understand the booing Kessel received. He was a draft pick, homegrown talent. Boston took a chance on him, considering how he fell in his draft year. Thankfully, he wanted to play for the Leafs.

NESN.com: Now that Kessel got any "homecoming jitters" out of his system during Saturday night's circus, do you think he has something to prove this time around?

G.T.: I sure hope so. Watching him during that game, he looked incredibly nervous. It was the first time I'd noticed that. Since starting with the Leafs, every game Kessel has played, he's appeared calm and relaxed. He's used his teammates and generally played a complete game. In Boston, he played anxiously. You could see him trying to do everything on his own. As a result, the Bruins keyed their defensive plan around stopping Kessel. Since after Phil there's a precipitous drop-off in offensive skill, it was obviously an effective plan. Don't get me wrong. I like a lot of the guys on the Leafs' current squad, but I'd be foolish to not see that Kessel is heads and tails above them.

This time around, I'm hoping we'll see more of Kessel using his teammates. He's gotten quite adept at holding on to the puck and drawing defenders to him before dishing it off. His release is scary (as I'm sure you'll recall) and can't be taken lightly. He's still a shoot-first guy, but he's learning to see more of the ice than just the spaces the goalie gives him. I think he'll want to use what he's learned from that Saturday game, and not try and go it alone. I'm hoping for that much at least.

NESN.com: Toronto appeared to be picking up some steam prior to the Bruins’ 7-2 thumping of them in Boston. Do you see this team bouncing back from such a loss or was their relative hot streak just a short-lived thing?

G.T.: To start the season, the Leafs were on a win-one, lose-10 rhythm. Since Kessel has been playing, that trend is slowly reversing. That's not to say I see a 10-game winning streak in the future, but right now, it's a win-two, lose-one trend. Unfortunately, the Leafs have won two since the loss on Saturday to the Bruins, and here we are again. That said, the loss on Saturday was embarrassing. Most of the team rolled over and called it a night before the third period even started. I'd imagine Ron Wilson is not going to let the team forget that, and as a Leafs fan, that's what's important to me. I'm not terribly concerned with the wins and losses in a season such as this. What I do want to see is the team compete and never quit. Hopefully, you'll get to see that team this time around, and we'll all get to watch some exciting hockey.

NESN.com: Colton Orr stirred things up on Saturday. Have his fists been a spark plug during the down times in Toronto?

G.T.: I'm not sure [GM Brian] Burke signed him to fight for that purpose. He's said himself he likes fighting in hockey, but not as a means to its own end. This past summer, when Burke said teams wouldn't come in and push the Leafs around anymore, he was giving Orr a purpose.

Burke's primary concern was the amount of abuse he saw the Leafs taking in scrums and such. Orr was signed to help toughen up the Leafs. The middleweights like Jamal Mayers and sophomore Luke Schenn were the only guys answering the bell last season. When faced with a Derek Boogaard, George Parros or Georges Laraque, the Leafs were definitely lacking. The addition of Colton Orr has already given other Leafs a little more swagger.

In a recent game, I noticed that Tomas Kaberle was actually involved in a scrum at the front of the Leafs' net, and was pushing pretty hard on the other guy. I don't know that I've ever seen him do that before. I like to see the team have some fire in them, up and down the lineup. Not just the grinders, but the high-skilled guys as well. I mean, Kessel just got into his first fight already this season. I like Milan Lucic a lot, but Kessel never scrapped on the Bruins. Maybe Colton made him feel a little bit bigger?

NESN.com: What do the Leafs need to do to keep their recent winning ways going?

G.T.: They need to keep playing the up-tempo team game we've seen recently. Wilson has been giving the third and fourth lines more shifts. It's helping to keep the legs fresh on the bench, and allowing the bigger bodies like Wayne Primeau, Mayers and Orr to lay out some punishing hits. The offense is starting to come from more than just whoever plays on Kessel's line. We're starting to see Francois Beauchemin play like the guy we'd hope had signed here. His shot has opened up options on the blue line, and keeps teams from keying in on Kessel. Niklas Hagman is currently running a little cold, but his play on the off-wing with Kessel on the man advantage is another thing that keeps teams worried. Guys like Matt Stajan, Ian White and Alexei Ponikarovsky are scoring as well. Even Colton Orr potted one recently, so you never can tell.

I know that the Leafs won't outskill many teams this year. What I've been seeing in their winning games is a team that is tenacious on the forecheck. There are a lot of big bodies on both the forward and blue lines.  The Leafs have started to use that size to wear down the opposition. At the same time, the dedication to the defensive zone is leaps and bounds above where it was to start the season. Vesa Toskala has looked pretty good in his last few games, and it's thanks to excellent defensive coverage. When Jonas Gustavsson returns, the Leafs will have two goalies fighting for playing time behind a fairly mean and stingy defense. That can only spell good things going forward.

Thanks again to Grant Tomkins of Pension Plan Puppets for sharing the Leafs knowledge. 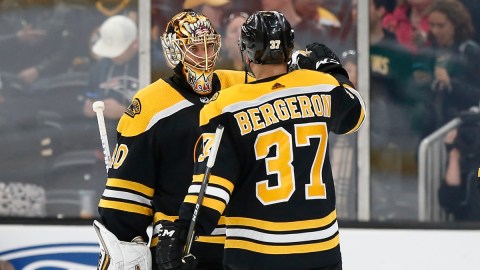