Final, Grizzlies 111-91: The final buzzer can't come soon enough. The Celtics walk out of the Garden with one of their worst losses this season, a 20-point blowout on their home floor. They got down big early and never looked back, playing from way, way behind from wire to wire. Rudy Gay finishes the night with 28 points on 10-of-18 shooting for the visiting Grizzlies, while five teammates hit double digits in Memphis' rampage. This is one the Celtics would no doubt like to forget.

Fourth quarter, 3:33, Grizzlies 107-81: For the season, the Celtics are holding their opponents to 44.5 percent shooting, the seventh-lowest mark in the NBA. It's a testament to their tough, physical defense and their eagerness to contest every shot they see. But tonight? The Grizzlies are on fire from all over the floor, hitting 57.3 percent of their shots led by a 7-for-8 effort from O.J. Mayo. Just a dazzling performance offensively from the Grizzlies tonight — not much else you can say.

Fourth quarter, 6:23, Grizzlies 99-74: The Celtics have given up entirely, and evidently so have their fans. We're practically seeing traffic jams at the exits now, with the Celtics down 25 and the Grizzlies delighting in running up the score against a Boston team that's thrown in the towel defensively. Not that it matters at this point, but Rudy Gay now has 26 points on 9-of-17 shooting, a stellar performance for the Memphis small forward against a tough defensive matchup in Paul Pierce.

Fourth quarter, 9:48, Grizzlies 87-67: You know it's bad when you've got a D-Leaguer slamming down dunks on you uncontested. Sorry, Grizzlies fans (both of you reading this) — that was a bit of a cheap shot. Hasheem Thabeet, the No. 2 overall pick in last summer's draft, now has seven points on 3-of-5 shooting to go along with five rebounds, a big spark off the bench for the Grizzlies as they maintain their 20-point lead here in the fourth quarter. It's impressive that the Grizz have done this with basically just an eight-man rotation.

End of third quarter, Grizzlies 82-63: The frustrating thing for the Celtics is that for the most part, they're really not taking too many bad shots anymore. They're getting good looks, and the ball's just not going in. Ray Allen, for instance, is 0-for-4 from long range tonight, but every shot has been open and uncontested, a high-percentage play that works for the Celtics on a good night. Same thing with Pierce — he's missed a couple of mid-range jumpers early in the shot clock, but they were good shots that you can't blame him for trying. The Celtics are working to make a game out of this, but the rims aren't cooperating.

Third quarter, 2:48, Grizzlies 71-57: You've got to hand it to these Garden fans — no matter how deep this team gets buried, they still know how to spring to life for a big energy play. Kevin Garnett throws down a monstrous dunk at the three-minute mark in the third quarter to bring the Celtics back to within 14, and the crowd springs to life once again after a mostly comatose first nine minutes of the second half. The C's are still buried in a double-digit hole, but they've got the support of a raucous crowd here at the Garden.

Third quarter, 6:01, Grizzlies 64-48: The shots have stopped falling for Mike Conley and Rudy Gay, and suddenly we're seeing the Celtics start to surge back behind strong defensive rebounding, a series of hard-earned layups and one big 3 from Paul Pierce. Only problem is that Kevin Garnett still can't hit a shot to save his life — the Big Ticket has been the big disappointment tonight, shooting 2-for-7 despite getting a lot of decent looks close to the basket. Can't have that.

Third quarter, 8:26, Grizzlies 62-39: This should be obvious by now, but I'll make the point anyway: Simply coming to life offensively and knocking down a few shots won't be enough at this point. The Celtics have to get stops — a lot of them, and quick — to have a chance in this one. They were able to come to life defensively in the fourth quarter against Washington on Sunday night, but it took them until the final eight minutes or so to turn it on and bring the shut-down effort defensively. Against the aggressive Grizzlies, they'll need more than just a strong fourth quarter. Down 23, they've really got to spring to life now.

Halftime, Grizzlies 55-33: Saved by the buzzer. The first half comes to a close and the Celtics are put out of their misery, headed to the locker room to regroup after arguably their worst half of the season to date. The Celtics have been outshot in this game 53.5 percent from the floor to their 38.9 percent; they've been out-rebounded 28 to 14. They have as many turnovers in this game as assists (six). You know it's bad when you're getting booed off of your own home court at halftime, and that happens to be the case for the C's, who trail by 22 heading into the break. Just an ugly, ugly first half here at the TD Garden.

Second quarter, 2:49, Grizzlies 50-31: It sure doesn't take long for the Grizz to answer with a 7-2 run of their own, and it's Rudy Gay who adds the exclamation point by slamming one in Rondo's face, widening the Memphis lead to 19 again in the process. It's a long road back from here, Celtics fans. And they can't afford too many more of these two-minute-long defensive lapses if they're going to have a chance.

Second quarter, 4:21, Grizzlies 43-29: The Celtics go on a quick 7-0 run over the course of one minute, and this crowd at the Garden reacts like they just won banner No. 18. A rare inside bucket from Rasheed Wallace, a 3 from the wing by Paul Pierce and a layup in transition for Rajon Rondo narrow the gap to 14 here in the second quarter, but the C's obviously still have a lot of work to do.

Second quarter, 5:56, Grizzlies 41-22: Just when you think the Celtics are starting to claw their way back into this game, Mike Conley is there to drive a dagger through their hearts. Marc Gasol makes a beautifully timed pass to kick one out to Conley in the corner, and the Grizzlies' young point guard knocks down a big 3 to snap Memphis' three-minute scoring drought and move the team's lead back to 19. The Celtics are getting a basket here and there, but they're still failing to get any kind of consistent offensive rhythm going. At this point, they could sure use it.

Second quarter, 9:47, Grizzlies 33-13: These things have a way of snowballing. The Grizzlies are on an 18-3 run since the middle of the second quarter, and it keeps getting worse because the further down the Celtics get, the more they start trying to force bad shots and take desperate measures to get back into this game. The 20-point deficit is ugly, sure, but it's still early. The C's need to calm down and play smarter basketball. They might not be off to a good start, but slow and steady is still what wins the race.

End of first quarter, Grizzlies 27-12: My diagnosis? God-awful shot selection. The Celtics have been settling for ugly jumpers time and time again throughout this first quarter, and it's just killing them. As a team, Boston finishes the first quarter 5-for-20 from the floor and 0-for-4 from 3-point range. Rondo especially seems to be pressing things in the early going — he's shooting 1-for-6, including an ugly 3-point attempt in the final minute of the quarter that he had no business taking. The Celtics are smarter than this, by and large, and they'll need to prove it if they want a way back into this game. A 27-12 deficit after one, especially home at the Garden, is just plain embarrassing.

First quarter, 3:11, Grizzlies 17-10: The Celtics are trying every trick in the book to slow down Zach Randolph, but it's not looking good. They've tried Kevin Garnett on him; they've had KG switch off and moved Paul Pierce onto him; Kendrick Perkins has pitched in a little bit, too. Nothing's working — Randolph has a game-high six points and he's scoring from all over the floor. The Celtics, meanwhile, keep settling for long — and often contested — jumpers. That's why they're buried in an early hole.

First quarter, 6:00, Grizzlies 10-4: So far in this one, it looks like the Grizzlies' size and physicality down low is a little bit too much for these Celtics to handle. Kendrick Perkins tries to create an easy layup, he runs into Zach Randolph; Rondo tries to drive and score, he gets swatted away by Marc Gasol. Everywhere the Celtics look, there's a large, athletic body to stop them dead in their tracks. Sure doesn't help that the C's are probably still a little tired from Tuesday night's grinding loss to the Bucks in Milwaukee.

First quarter, 9:09, Grizzlies 4-2: Doc Rivers talked before tonight's game about the Celtics' failure to move the ball well in their loss last night to Milwaukee. So far in this one, that doesn't appear to be a problem. The Celtics are executing well this time out, making good entry passes and also kicking it out to the wings when the situation warrants; only problem is, the shots aren't falling. The Celtics are 1-for-4 so far, with a driving layup from Rajon Rondo as their only bucket.

4:58 p.m.: The Celtics had a rough go of it in Milwaukee on Tuesday night, getting outmuscled down low and taken out of their element in an 86-84 loss that was decided in the final seconds on a missed buzzer-beating jumper by Paul Pierce. They'll now look to regroup, and there's no better place to do it than in the comfort of home.

The C's play host Wednesday night to the Memphis Grizzlies, who have won three out of their last four and look like a possible playoff team in the Western Conference if everything shakes out right. These young Grizzlies are hungry and have a lot to play for.

The Celtics snapped a four-game win streak against the Bucks on Tuesday, so they'll be eager to return to their winning ways. Meanwhile, the Grizz will be out to avenge a loss to the Celtics from earlier this season, a 111-105 shootout in Memphis on Dec. 14. 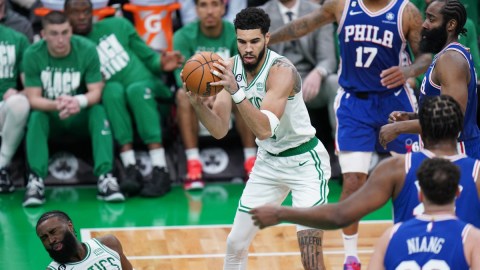 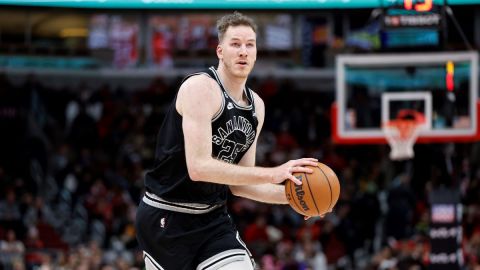 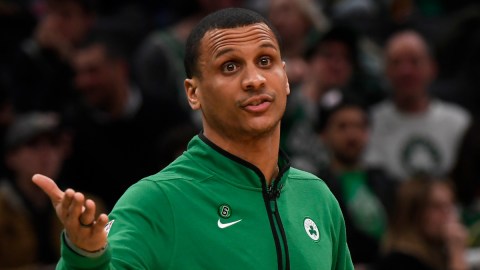 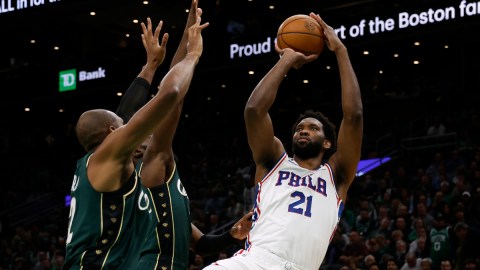