Thursday afternoon's careless display from the Red Sox at Target Field begs the question: What in the world happened to run prevention?

While the Red Sox went out of their way to stress the importance of defense in the offseason, the team at times looked more like a high school team than a major league club on Thursday.

The team committed three errors on Thursday and at least one more mental error. Bill Hall misplayed a ball in center field (his second error in as many games) in the second inning, but it didn't cost the Red Sox any runs. In the fourth, Victor Martinez sailed a ball into center field while trying to catch Michael Cuddyer stealing. Cuddyer moved up to third on the throw. Again, that error did not come back to haunt the Red Sox.

In the sixth, things got plain ugly. Adrian Beltre fielded a routine ground ball behind third base, but his throw pulled Kevin Youkilis off first base by several feet. Two batters later, a relay throw came to the plate, holding the runners at second and third. Yet Martinez inexplicably fired the ball to second, allowing Nick Punto to alertly score.

Martinez's mental error (and Marco Scutaro's subsequent mishandling) was perhaps the biggest mistake of them all, even if it didn't go down in the books as an error.

Sure, any team can have a bad game in the field (especially on a getaway day), but Thursday's game was particularly notable because it wasn't exactly an outlier. The Red Sox have five errors in nine games, good enough for the sixth-best fielding percentage in the majors. Sixth place obviously isn't terrible, but for a team that was supposed to be revamped defensively, the results have not been there.

It's early, yes, but as they say, defense never slumps. Is there time to wait for them to come around, or have you seen enough?

April 15: Who is the best leadoff option for the Red Sox? 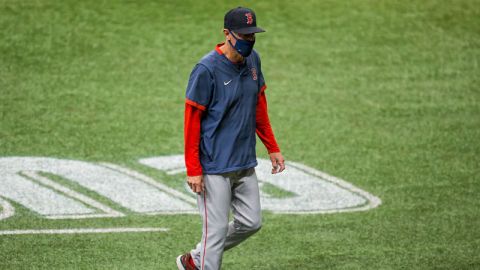