If there's anyone who can relate to Mark Sanchez this Sunday, it's Ben Roethlisberger.

It wasn't all that long ago that Roethlisberger was a rookie quarterback who led his team to the AFC Championship game, only to get his dreams squashed by the Patriots and Tom Brady, one of the best quarterbacks of all time. That was Sanchez last year, with Peyton Manning serving as the Hall of Fame quarterback to end the rookie's season.

A year later, in 2005, Roethlisberger led the Steelers all the way to the Super Bowl, as the Steelers won three road playoff games in order to punch their ticket to Detroit as the No. 6 seed.

Now, Sanchez is in the exact same position, after the Jets topped both Manning and Brady on the road in consecutive weeks. It's fitting, then, that Roethlisberger is the one Sanchez has to beat in order to get the Jets where they want to go.

The comparisons don't just end with playoff experience, however. When Roethlisberger entered the league, critics worried that the Miami (Ohio) University alum's unorthodox style wouldn't work in the NFL. His throwing motion was ugly, he wasn't athletic enough and he held on to the ball too long, they said. Yet, he won, with his team going 26-6 in his first two seasons in the league (with a 5-1 playoff record to boot).

Similarly, Sanchez is not short on critics. The first was his former college coach, Pete Carroll, who stated clearly that he didn't think his quarterback was ready for the big time. Maybe he wasn't, as evidenced by Sanchez's 20 interceptions as a rookie, but his 20-12 record as a starter (and 4-1 playoff record) says otherwise. And, with a win on Sunday, Sanchez would set a record for most road playoff wins in the history of the league. Critics aside, Sanchez is winning football games, which is really the only thing that matters.

"I think the biggest stat is you look at the wins and all that, and fourth-quarter comebacks," Jets coach Rex Ryan said in a news conference on Thursday. "I don't know the numbers … but he's had plenty. I think that whether it's clutch or whether it's confidence, he has it."

After sending Manning and Brady home for the winter, that confidence is as high as ever, but Ryan said it's something that's never lacking in his 24-year-old quarterback.

"I think that's a hard skill to develop. I think you either have it or you don't," the coach said. "I'm sure he's [always] had it, and I bet you he's won at every sport: baseball, basketball, whatever it is. Because the great ones, the competitors, find ways to win, and I think Mark is that kind of guy."

At this point, it's hard to argue with Rex. Sanchez, while not posting otherworldly numbers, has made big throw after big throw all season long. There was his overtime winner to Santonio Holmes in Cleveland (sure, it was a slant route, but the perfect pass allowed Holmes to catch it in stride and outrun everyone to the end zone). There was the bomb to Braylon Edwards, which set up a perfect pass to Holmes to beat the Texans with 10 seconds left in the fourth quarter. There was Sanchez's naked bootleg to beat the Steelers back in December, the clutch throw to Edwards in Indy to set up the game-winning kick and the absolutely gorgeous touchdown pass to Holmes last Sunday in New England.

The kid's resume is getting long, just like Roethlisberger's back in '05. Roethlisberger knows the exact position that Sanchez is currently in, but don't expect the veteran to be offering the kid any advice — he'd much rather give him another lesson in losing.

Still, if Sanchez is able to lead the Jets to victory, expect Roethlisberger to be among the first to offer him a heartfelt congratulations. It'd be hard for No. 7 to not see a little bit of himself in No. 6. 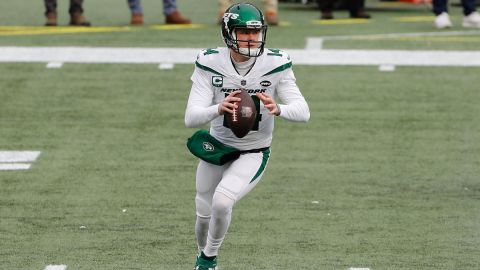