This 2011-12 Liverpool team will go as far as Steve Gerrard takes it. On Saturday the Reds' longtime captain led his club to a 1-1 draw against rivals Manchester United at Anfield.

He put Liverpool ahead with a 68th minute free-kick goal that was admittedly nothing special. It looked as if the hosts would win their fourth consecutive home encounter with the Red Devils, but Javier "Chicharito" Hernandez tied the game in the 81st minute. The fans were treated to a pulsating finish, but the draw was always the likely result in this game. Let's return to Gerrard in a bit.

Minority owner and off-duty NBA superstar LeBron James sat in the directors' box taking in his first ever English Premier League game. If he's using the quality of this one to decide if it's worth returning for another, it may be a while before he graces Anfield or any other EPL stadium with his presence (after the next Norman invasion perhaps).

Savvy predictors saw it coming. This crunch meeting between England's two most famous clubs took place on the weekend sandwiched between the international break (players leave clubs to play for their respective national teams, often travelling great distances) and midweek UEFA Champions League games. Managers often rotate their teams on such occasions, benching regulars and relying on squad players rather than stars.

Saturday's draw may have been full of emotion, energy and determination, but it lacked what an estimated 500 million fans and neutrals came to see. The superstars that make the EPL the world's most famous league either sat out much of the match or, as in Gerrard's case, were nowhere near peak form because of injuries, travel or distress.

Clean passing and possession play was virtually nonexistent. Fluidity in movement was all but absent. But there were goals and the 1-1 result was a fair reflection of the parity between the two teams on the day. Liverpool manager Kenny Dalglish said his team was disappointed to settle for the draw, but that frustration stems from the tangible progress the club has made in a full year under the current ownership.

"It's a real indication of how far we've come when we come into the dressing room and the boys are disappointed that they've drawn 1-1 with Manchester United," he said after the game. "We're delighted that they're disappointed. We'd have been happier if we'd got the three points but the attitude, even when United equalised when we came back and went for the three points, was admirable. The only thing that was missing today was walking away with three points."

The first half saw each team take just one chance on the opposition goal. Defender-turned-midfielder Phil Jones headed wide of Pepe Reina's goal for the visitors. Luis Suarez hit a shot directly at David De Gea that he might have scored on another day.

The second half opened in the same fashion as the first until Charlie Adam's mazy, penetrative run through the visitors' midfield and defense (yes, Adam) was stopped only by Rio Ferdinand fouling him yards outside the penalty area.

Gerrard was quietly effective in his return to the starting lineup up to that point. He limited himself to working hard on the defensive side of things and controlling whatever tempo he could with the ball. He kept play moving with the ball, but did not play a role in any of the game's few flashpoints until Ferdinand fouled his midfield partner.

The Liverpool captain's free-kick was hit with power but not accuracy. On most days, it would have hit the well-positioned defensive wall. But Ryan Giggs -? having played over 800 games for Manchester United -? inexplicably moved from his spot on its edge, allowing Gerrard's shot to curl into the net.

Enter Manchester United's stars. Nani, Hernandez and Wayne Rooney came on and the visitors upped their effort in search of the equalizer.

They would be rewarded in the 81st minute. A corner kick was headed on by the industrious, yet ineffective Danny Welbeck. It bounced through a morass of defenders to a perfect height for Hernandez to head it past Reina. He was uncontested because Liverpool defender Martin Skrtel slipped and lost track of the nimble Mexican striker.

Dirk Kuyt and second half substitute Jordan Henderson came close to netting a winner for Liverpool, but it was never to be.

The two teams are as they were before kickoff. Manchester United remains at or near the top of the League (depending on the Manchester City result) and Liverpool stays six points behind their rivals.

Like Gerrard, the Reds are a work in progress. They took a point off of the league leaders, but there is plenty of room for improvement. The captain scored a decisive goal, but Liverpool supporters know there is much more to come from the "complete" midfielder. 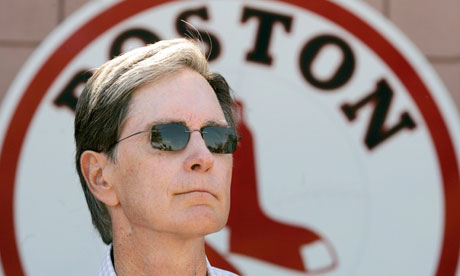