There was some incredibly intelligent baserunning put on display by the Boston Red Sox during their 5-2 loss to the Cleveland Indians on Saturday night, and there was some absolutely dumbfounding baserunning on their part, as well.

First, the good. In the Sox' two-run fourth inning, with Jacoby Ellsbury at third, Carl Crawford on first and Dustin Pedroia at the plate, Pedroia hit a bouncing ground ball to Indians third baseman Brent Lillibridge. Alertly realizing that the grounder pulled Lillibridge well off the bag to his left, and that no one was covering third, Ellsbury danced well down the line toward home.

Though likely never intending to make a break for it, Ellsbury's movement caused Lillibridge to hesitate and start to move toward Ellsbury, giving Pedroia enough time to bust down the line and beat out Lillibridge's ensuing throw, loading the bases. It was a great heads-up play by Ellsbury, who used his speed to put pressure on the defense and cause a mental error that won't show up in the box score (the play was scored as a fielder's choice).

Adrian Gonzalez followed with a two-RBI double, showing just how dangerous speed can be at the top of a lineup, and how well it can disrupt a game.

However, Pedroia's beat-out fielder's choice may have gotten into his head a little bit, as the second baseman was thrown out by a wide margin trying to score the third run on Gonzalez' double. Instead of runners at second and third with no outs, the Sox had just a runner at second with one out, and wouldn't score again in the game.

Another blunder came two innings later in the top of the sixth, when Ellsbury doubled to the gap in left-center leading off the frame, but was thrown out at third trying to stretch the play into a triple. At the time, the game was tied at two runs apiece, and the play squelched any thoughts the Sox might have had about starting a rally. "Real good players that are playing aggressively," explained Sox manager Bobby Valentine after the game. "The scoreboard sometimes dictates whether or not you shut it down with no outs, and it cost us tonight."

What Valentine is referring to is the fact that, in a tie game, there's no reason to get aggressive on that play. There an age-old adage in baseball that says "Never make the first or third out at third base." Like all general pieces of wisdom, it's not always true and must be applied to the specific situation, but this was clearly a case when the Sox really needed that runner on second — the payoff of having a runner at third was relatively low.

Moreover, Ellsbury looked like he took a slight hesitation turning the corner on the second base bag, and, in the end, despite a well-offline throw, Lillibridge was basically waiting at third base when Ellsbury slid in.

These instances didn't just take a runner off the basepaths or remove a potential RBI, but they were also overall momentum killers for a team that wasn't able to muster much of anything against the 24-year-old Indians right-hander Zach McAllister — who faced the minimum three batters (with some help from Ellsbury) in seven of his eight innings of work.

There aren't any excuses for the Red Sox, who are three games under .500 and about to run out of time to make any kind of realistic run for a playoff spot. You can't do anything about physical errors and injuries, but mental errors are inexcusable at the point in the season.

And mental errors potentially cost the Red Sox a ballgame on Saturday night.

Chad Johnson Accused of Head-Butting Wife Evelyn Outside Home in Florida, Could Be Held in Jail Until Monday 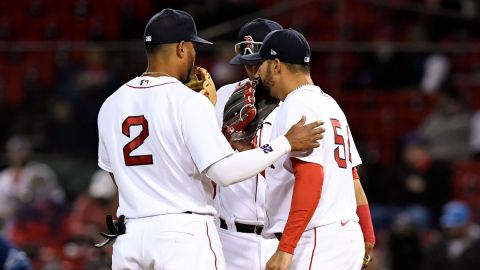