It will be nearly four months since the Patriots went to Baltimore and lost to the Ravens in Week 3 by the time the AFC Championship Game rolls around on Sunday, and New England may still be having nightmares about Torrey Smith (and the officiating) from that first matchup.

Fortunately for the Patriots, the team has seen a sizable shakeup in the secondary since Smith went off for 127 yards on six receptions and two touchdowns less than 24 hours after his younger brother died in a motorcycle accident. Those changes to the defensive backfield should help New England fare much better against the Baltimore deep-threat option.

Since Sept. 23, Devin McCourty has moved from cornerback to safety, Steve Gregory has leapfrogged Patrick Chung as a starter, Kyle Arrington has moved from outside to the slot, Alfonzo Dennard has emerged as a starter and Aqib Talib has come in from the Buccaneers in a trade. Needless to say, this is not the same team that Joe Flacco threw for 382 yards and three touchdowns against.

Bill Belichick and Matt Patricia deserve a lot of credit for highlighting an issue and taking the steps to solve that problem. It wasn’t an easy fix, and it can’t all be heaped on the McCourty move. That certainly helped, as his instincts and closing ability has been a major upgrade over the rest of the safeties on the roster, but Talib and Dennard deserve credit, as do Belichick and Patricia for changing the defensive scheme.

Before Talib and Dennard were entrenched as starters, the team was playing far more zone coverage and cover two, whereas now we’re seeing a lot more man on the outside with one safety over the top. The fact that Arrington can now focus on his strengths as a slot cornerback help as well. Arrington struggled on the outside, and plays much better with a wide open field — and the ball — in front of him.

Even with all the changes the Patriots have made, Smith and his wide receiver companion Anquan Boldin offer a major challenge. Smith made a couple huge plays against the Broncos on Saturday during the Ravens’ double-overtime 38-35 win over Denver. Smith had three receptions for 98 yards and two touchdowns, and offers incredible speed and tracking ability for Baltimore.

Smith was known as a one-route guy coming out of Maryland, and while he still won’t amaze with his route-running ability, few receivers run in a straight line and catch the deep ball better than the former Terrapin. But while defending that was one of the Patriots’ biggest weaknesses through the first six weeks of the season, they haven’t been exploited on the deep ball for weeks.

While the Ravens do offer plenty of other threats for the Patriots’ defense, including Ray Rice in the backfield, Smith may not be quite as much of a mismatch on the outside this time around. The Week 3 tape might as well be useless for Baltimore in preparing for New England’s secondary after a complete retooling. 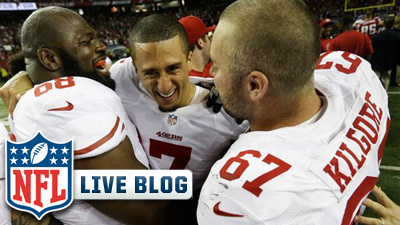