Bruins coach Claude Julien may have raised some eyebrows last week when he was talking about his coveted fourth line.

The Bruins’ bench boss raved about the energy line’s performance in a loss to the Washington Capitals, arguably the lone bright spot from perhaps the worst loss of the season.

“Our fourth line played their best game, probably in a year and a half, last game in Washington,” Julien said Thursday morning after the club’s morning skate preceding a game with Toronto. “They were a real big factor. I thought they had great scoring chances, a lot of O-zone time and everything else.”

Well the coach obviously knows his team pretty well, and the fourth line is showing that performance against the Capitals was a sign that even better things were coming. They have turned it on as of late, and they were another big factor in the Bruins’ 3-2 shootout win over the Ottawa Senators on Monday night.

On a night in which the Bruins found themselves on the wrong end of a 2-0 game just a little more than seven minutes in, the B’s needed a spark. They got that in part from a Julien timeout after the second goal as well as a big Tuukka Rask save a little later in the period, but from there, it was the fourth line that took over.

Shawn Thornton scored his second goal of the season in the period’s final minute, which undoubtedly gave the B’s a jump heading into the dressing room, especially given the ugly start to the game.

“A little bit of a relief coming in here for intermission I guess,” Thornton said of the rare goal. “It was pretty lucky. A couple of things had to happen for that to go in. Those guys did a good job in front. It had eyes for once; usually they don’t have eyes for me. Usually it’s right into his belly and it’s a faceoff. Then [Patrice Bergeron] comes out and takes the faceoff. I won’t ask anything more than that. I’m happy it went in.”

The good fortune for the fourth line didn’t end there. Daniel Paille would later tie the game up when he was the beneficiary of a little bit of luck. The forward jumped onto the ice at the right time and, after a long second period shift, he was immediately in the right position to be the receiver of a gorgeous pass up the ice from David Krejci. Paille showed off first-line skill by beating Robin Lehner with a nifty move on the breakaway to tie the game 2-2, Paille’s second tally in as many games.

It was a fitting reward for a line that is starting to come around, and they’re doing so after Julien called on the third and fourth lines to start picking things up after a tough loss to Montreal on Sunday.

“I try not to put too much stock into our points,” Thornton said. “I think, as a group, our last five or six games, maybe we’ve been rewarded the last couple of games. I think our pressure, our forecheck, our D-zone has gotten back to where it once was. I think that’s a positive. I wouldn’t say we’re confident or anything, but I think we’re headed back in the right direction.”

The Merlot Line, named for the red jerseys the fourth line dons in practice, sometimes sees a little too much ice time in the eyes of some. But as of late, it’s clear that they’re rewarding the trust Julien has placed and will continue to place in them.

“They just put pucks in the net [on Monday] and they’re working hard and they’re turning the corner and we’re starting to see the line we’ve always wanted to see from them,” Julien said. “You need that kind of performance from them when some of our top lines aren’t performing.”

That’s all you can ask out of the fourth line. On a night in which the Bruins got nothing out of the first and second line (Monday marked the first time since Feb. 24 no one on the Bergeron line scored a goal), the fourth line was there to give them not only energy, but results as well.

It’s not going to happen every night. Really, it’s not going to happen very often to be brutally honest. But if the fourth line is doing its primary job — creating energy — Julien and the Bruins will be happy. If that line can start putting the puck in the net and stealing a game here and there, the coach and his club will be tickled pink. 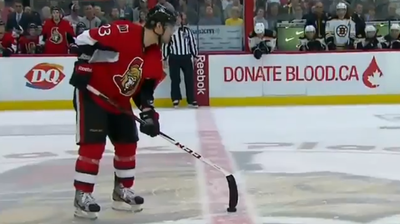