To say the second wave of NFL free agency is moving slower than molasses would not only be cliche, but also an understatement. Since the annual league meetings started up last week, NFL news has filtered out at a snail’s pace.

There are still plenty of viable options out there too. Nnamdi Asomugha and Brent Grimes highlight the veteran cornerbacks, Ahmad Bradshaw, Eric Winston and Andre Smith are the top offensive players and Elvis Dumervil, John Abraham and Dwight Freeney are still out there among veteran free agent pass rushers.

The Patriots brought Abraham and Freeney in on free agent visits over a week ago, and New England had reported interest in Dumervil as well. Now, if you were to believe everything the Twitter reporters throw against the wall, you would think Abraham signed last week with the Patriots. Since that time, he has taken a visit with his new road trip buddy Freeney to Denver. So obviously those reports were bogus.

Any one of Dumervil, Abraham or Freeney would help the Patriots greatly, but Abraham is by far the best fit. Dumervil is the youngest player at 29 years old, but he’ll also be the most expensive. He was set to make $8 million in 2013 before his now-former agent failed to fax paperwork to the Broncos on time. He likely won’t be happy taking much less than that $8 million figure and the Patriots have around $15 million in cap room.

Freeney would be the cheapest, but he’ll also be the least productive, and he likely wouldn’t be a starter in New England. Freeney would be in on a rotation with Chandler Jones, Rob Ninkovich and any assortment of Justin Francis, Jermaine Cunningham and Jake Bequette. He would likely be a situational player on third down.

Last season the Patriots missed a situtional pass rusher like they had in Mark Anderson in 2011. Jones and Ninkovich were expected to stay in on all three downs because the Patriots didn’t have a better player to bring in on third down to get after the passer. By bringing in Abraham, that would give New England three viable starters at the defensive end position. Jones, Ninkovich and Abraham could rotate at right and left defensive end and all three players would be solid against the run and pass.

Abraham wouldn’t be nearly as costly as a player like Dumervil, and he would provide more value than a player like Freeney. Abraham is also still hunting for his first Super Bowl ring, so it’s possible he would be willing to take less money to play for a contender in New England.

Jones could also kick inside on third down to get after the passer from defensive tackle. He was drafted at 6-foot-5, 266 pounds, but he said during training camp that he had bulked up since joining the Patriots despite being listed at 260 pounds.

While in college, Jones showed a tenacity to get after the passer from the inside that he rarely got to show during his rookie season in the NFL. Last season, Bill Belichick put Cunningham inside on third downs, but Jones would likely be a better fit for that position. That would put Ninkovich and Abraham on the outside and Jones and either Vince Wilfork or newly-signed Armond Armstead on the inside in sub packages. That would be a big improvement over what the Patriots had on third down in 2012. 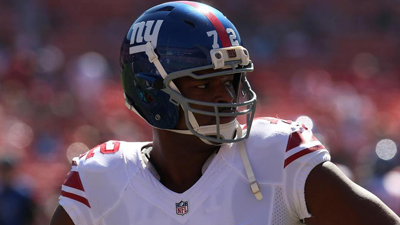 Report: Osi Umenyiora Expected to Sign With Falcons in Next Two Days