BOSTON — The Bruins played with heavy hearts Wednesday night, but they weren’t alone in being moved by what was an unforgettable pregame scene at TD Garden.

The B’s hosted the Buffalo Sabres on Wednesday night in the city’s first pro sporting event since Monday’s horrific Boston Marathon tragedy. It was a night filled with emotion, one that the Bruins were clearly moved by. However, they were not alone in being touched by what went on inside that building.

While the Sabres weren’t representing a city struggling to return to its feet, the visitors surely felt the impact of one of the most moving nights in the Boston’s longstanding history.

“It?s emotional for me as well as an American even as a member of this society where we live and we?re free and you hate to see these things happen,” Sabres goalie Ryan Miller said. “I think transcends what nationality you are, we?re all people and it was horrible to see all the people injured and the people who died.”

The emotion flowed early and often, and that started with an unforgettable pregame scene which featured a video montage looking back at Monday’s events in advance of Rene Rancourt giving way to 17,000-plus singing the national anthem.

“And the video right before we had to play was pretty emotional, pretty raw and I can?t imagine what everyone is going through here,” Miller, who said he couldn’t bring himself to head down toward Boylston Street, continued. “Just kind of looking over your shoulder and I think first responders, people in the blast area, everyone in this city is showing tremendous character and I wouldn’t expect anything less from an American city. It just shows how great our society can be when we step up. It?s unfortunate such a horrible event has to happen.”

Miller was far from alone in being touched by what went in the Garden for a precious few moments leading up to puck drop between two divisional rivals.

“It definitely puts things into perspective,” Buffalo forward Drew Stafford told reporters. “It goes to show you that there are more important things than hockey and the game here. This is our job. We are trying to put on a show for the fans, and hopefully give them some sort of escape. Know that with everything that happened, emotions were extremely high tonight. I am sure that there were not a lot of dry eyes in the stands during the anthem. That intro was pretty powerful.”

The Bruins and Sabres let the fans and the city know that they were behind them with the way they played Wednesday night. But that also carried over into the final seconds after the Sabres wrapped up a shootout win when the two teams met at center ice, tapping and raising their sticks in salute of the fans and the city.

“We talked about it before the game,” Buffalo forward Cody Hodgson said. “We feel for the city of Boston and the people involved. It affects everybody. It?s something that we talked about. A quick tribute to them and what they have done.” 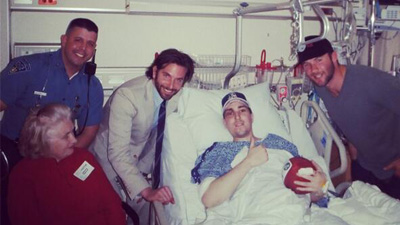 LeBron James Could Be First Unanimous MVP in NBA History, Expected to Win Award for Fourth Time in Five Years