The Boston Red Sox organization was represented by three prospects in the All-Star Futures Game on Sunday afternoon — Xander Bogaerts, Garin Cecchini and Anthony Ranaudo — and two of them had very strong outings.

Bogaerts started at shortstop for the World team, which lost 4-2. He went 2-for-3 with two singles, a walk and a run scored on a sacrifice fly. He is currently playing for Triple-A Pawtucket where he is hitting .294 with 13 home runs and 54 RBIs this season.

Cecchini, who was recently promoted to Double-A Portland, also had a solid showing on Sunday, although he was playing opposite of Bogaerts for the U.S. team. The third baseman came off the bench in the fifth inning and went 1-for-2 with an RBI double to right field. His double gave the U.S. squad an insurance run to work with in the bottom of the eighth. Cecchini is hitting .353 with eight home runs and 57 RBIs overall this year.

While Bogaerts and Cecchini both enjoyed themselves at the Futures Game, Ranaudo did not. He came into pitch for the U.S. team in the fourth inning, and he only lasted 2/3 of an inning. He allowed two runs, two hits, two walks and a wild pitch. One of the runs came on a home run by Arismendy Alcantara. Ranaudo, who is pitching for the Sea Dogs, also struggled in the Eastern League All-Star Game on Wednesday. While he has struggled in both all-star games, he is still having a strong season, as he has an 8-2 record with a 2.67 ERA and 94 strikeouts this year. 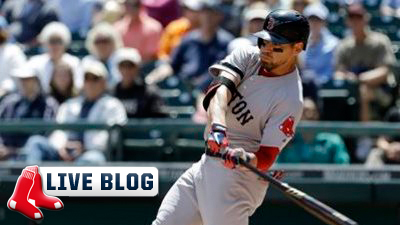