Final, Bruins 3-2: That’s it, and that’s all, as the Bruins are able to come away with the overtime win.

Ryan Spooner and Loui Eriksson used their speed to create a 2-on-1 into the Winnipeg zone, and Spooner fed to Eriksson who was able to kick it to his stick and then bury the game-winner up under the crossbar.

End third period, 2-2: Things tightened up in the final minutes of the third period, but Niklas Svedberg did have to make a big save with about 2:30 to play.

He was able to get across the crease to make a save on Evander Kane as the Winnipeg sniper came down the left side of the slot before being denied.

Third period, 16:30, 2-2: This is officially a frustrating night for the Boston power play.

They couldn’t get anything on the 5-on-3, and those struggles continued, as the Jets were able to kill off the Evander Kane penalty as well.

Evander Kane was just called for tripping Dougie Hamilton in the neutral zone, and the Bruins have a golden chance to take the lead.

Third period, 12:21, 2-2: The Bruins will get another chance after the power play after another questionable penalty call.

Adam Pardy got in the way of Reilly Smith, apparently, as the Boston forward tried to get to a puck going toward the Winnipeg net, and Pardy was called for holding apparently.

Third period, 11:20, 2-2; Boston was able to get a couple of shots on goal during the power play, but they couldn’t find the back of the net. They didn’t really get much in the way of chances during that man-advantage, their first full power play of the game.

Michael Frolik was just called for hooking, and the Boston power play will go to work.

Third period, 6:22, 2-2: It wasn’t the prettiest of goals, but the Bruins have tied the game here in the third period.

Ryan Spooner threw what appeared to be a harmless shot toward the goal, but he did so through traffic, and the puck had eyes that found its way to the net. Matt Fraser apparently tipped it at some point because he was the one credited with the goal.

Third period, 4:21, Jets 2-1: The Jets have their first lead of the game after netting their second power-play goal of the night.

This one belonged to Mark Scheifele, who beat the Bruins’ defensemen and then got around Niklas Svedberg with some fancy stickhandling to score the go-ahead goal.

Third period, 2:59, 1-1: The Bruins just had a fantastic chance that all started with forechecking from the fourth line.

That led to a great scoring opportunity for Shawn Thornton who was fed right in front, but Ondrej Pavelec made a terrific pad save.

Moments later, however, the Bruins were called for another penalty. This one went to Matt Fraser, who was nabbed for holding.

Third period, 0:01, 1-1: The third period is underway at MTS Centre in Winnipeg.

End second period, 1-1: The Bruins were able to kill off the Dennis Seidenberg, but barely.

Niklas Svedberg came up with four big saves, and he got a little help from Kevan Miller when the defenseman was able to get in front of the net and block an Evander Kane shot when the Winnipeg sniper had a wide-open cage.

The Jets outshot the Bruins 13-3 in the second period.

Second period, 16:39, 1-1: The Bruins weren’t able to get anything on their ensuing power play, which was abbreviated time.

They had a really good chance, however, when Brad Marchand found Loui Eriksson with a no-look pass from the goal line. Eriksson then fed it to a streaking Patrice Bergeron who came down the slot looking to score his second goal. Bergeron ended up hitting the post, though, and the game remains tied.

The Jets will get another crack at the power play, though. Dennis Seidenberg just tripped Devin Setoguchi, and Winnipeg gets another man-advantage.

Torey Krug went to play a puck in the air with his hand, and he was hit by Dustin Byfuglien. It looked like a fairly clean play, but Byfuglien was called for roughing anyway.

The center was going off for a line change when the puck came right to him as he was about to step onto the bench. Instead of continuing onto the bench, Bergeron played the puck and dumped it in. The problem with that, though, was that there were too many men on the ice.

Second period, 10:39, 1-1: Still no second-period scoring, but the Bruins’ second and third lines in this one are generating some chances.

There are a bunch of those guys playing for just a couple of spots, and the desperation is showing. Reilly Smith continues to have a good preseason, as does the aforementioned Ryan Spooner.

Second period, 7:12, 1-1: This game has been flying around without many whistles, which is also the reason for infrequent updates.

One player is certainly playing well for the Bruins right now is Ryan Spooner. He’s kind of the odd man out at this point being a center, but he’s playing like he wants to make the decision difficult or at least earn some bonus points. He flies up and down the ice, as we just saw when he carried the puck up the ice, entered the offensive zone and put a shot on goal. He’s also won all four faceoffs he’s taken.

End first period, 1-1: The first period comes to an end with the game tied 1-1. The Bruins dominated much of the first, but the Jets played well in the final few minutes to tie the game and try to swing the momentum some.

First period, 17:02, 1-1: Devin Setoguchi ruined the first power play, but he was able to get the Jets on the board during this most recent power play.

A shot was blocked in the slot, and Matt Bartkowski tried to clear it from the Boston zone. He couldn’t get good wood on it, and the puck went right to Setoguchi in the high slot. He put a shot on net, and it was ale to get through Niklas Svedberg to tie the game.

The B’s did get a scoring chance in the 47 seconds of power-play time after Matt Fraser tried to jam home a puck in front of the net, but he was unsuccessful in doing so.

The Bruins are actually going back on the penalty kill, though. Dougie Hamilton just picked up his second penalty of the period, this one for cross-checking a Winnipeg forward in front.

First period, 12:00. Bruins 1-0: The Bruins just had a really good chance off the stick of Torey Krug.

On the faceoff following the Winnipeg penalty, Krug ended up with the puck down on the right wing in the faceoff circle. He walked in on Ondrej Pavolec and let a solid wrist shot go, but the goalie was able to make the save.

If Krug can start walking in and picking corners from down there, it’s going to be really bad news for opposing goalies.

Dougie Hamilton was just called for interference on a 2-on-2 break for the Jets, and now the B’s will be down a man.

The Jets certainly got their money’s worth when the Bruins were down a man during the delayed penalty. The Jets possessed the puck for a whole 1:10 before the B’s finally touched up for the penalty.

The forward just scored his first goal of the preseason after a wonderful effort from Brad Marchand. The winger stopped on a dime along the boards, changed direction and found Bergeron coming down the slot. Bergeron beat Ondrej Pavelec with a quick wrist shot that beat the goalie stickside.

7:30 p.m.: The game is just moments away. Niklas Svedberg will start for the Bruins, while Ondrej Pavelec gets the nod for the Jets.

The Jets are featuring a lineup with a good number of NHL regulars, including players like Evander Kane, Olli Jokinen, Blake Wheeler and Dustin Byfuglien, just to name a couple.

Check out the entire roster below.

5 p.m.: One week from Thursday, the Bruins’ regular season will begin. Before that, though, there’s still some preseason business to take care of, and that continues Thursday night against a former conference rival.

The Bruins will take on the Winnipeg Jets twice over the next two nights beginning with Tuesday’s tilt in Winnipeg. The first game of the two-game “series” will be started by goalie Niklas Svedberg. The young netminder is looking to win the backup job, and he could earn some big points in that competition with a stellar showing Thursday.

The Bruins will also be showcasing one of their top two lines Thursday night as Patrice Bergeron’s line will be in action. The veteran forward will center what will be the B’s top line Thursday night. Also among regulars, the fourth line will be making an appearance in the first of the two games.

Here’s the projected lineup via the team’s official website.

Carlos Gomez, Reed Johnson Suspended One Game Each for Roles in Brewers-Braves Brawl 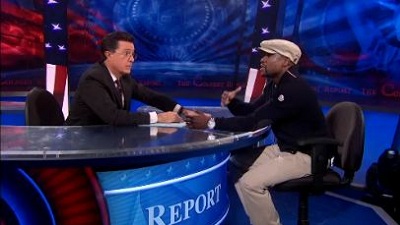 Floyd Mayweather Appears on The Colbert Report, Jokes Chess Is ‘Only Way Out’ of Tough Neighborhoods (Video)