No, the NBA wasn’t just being stupid for 19 years, as tempting as that characterization may be.

The league’s board of governors approved a significant change to the NBA Finals format on Wednesday, and from the reactions from fans and some experts, one would think the NBA finally agreed to stop sacrificing virgins during every halftime. The prevailing opinion — from those not yelling “ZOMG! WTH was the NBA thinkin with the old skedule ANYWAYS!?!?” — was that the format never should have been in its previous incarnation at all.

And this position, truth be told, is wrong.

For anyone who doesn’t have NBA Finals Format Change News push notifications set up on his phone, the NBA is going back to the Finals format used prior to 1985. The NBA Finals will now use the 2-2-1-1-1 format used by every other NBA playoff round and the NHL’s Stanley Cup Final. From 1985 to 2013, the team with home-court advantage opened the series with Games 1 and 2 at home and finished the series with Games 6 and 7 at home, if necessary. In the middle, that team had to play three straight games on the road.

What this meant was that if the team with the superior record lost one of the first two games at home, it suddenly was in danger of losing the series without ever getting another game back at its place. If the series went no more than five games, the higher-seeded team effectively had a homecourt disadvantage. This also led to some alleged finagling with the outcomes of games on the part of some powerhouse teams — the 1996 Bulls are quietly said to have been kind-of-maybe not-so-intent on winning Games 4 and 5 against the Sonics out of a desire to win and celebrate their title at home.

The format is now back where it should be, assuring that the team with home-court advantage will have played at least the same number of home games as its opponent throughout the series. It will be more fair, it will return home court to being an actual advantage, and it makes sense given the NBA’s current means.

It is hard to imagine now, but the NBA once had to be very conscious of the bottom line. None of the four major sports leagues got lower than the NBA in the 1970s and early 1980s, when expansion and social changes in the makeup of the league contributed to a decline in the league’s popularity.

Although the NBA was in the midst of its rebirth with Larry Bird and Magic Johnson, the explosion of Western Conference teams was making the logistics of the East vs. West NBA Finals a challenge. No longer were East Coast teams facing off against “western” opponents from Milwaukee. Flying back and forth across the country four times in two weeks wasn’t just a hassle. It was costly. Teams were flying from Boston to Los Angeles or from Washington, D.C., to Seattle, riding on commercial jets to play games that would not be shown live on TV. Every flight was an added cost for teams without the promise of recouping that money through advertising.

The change was made, in part, by Celtics president Red Auerbach‘s complaints to former commissioner Larry O’Brien and then-new commissioner David Stern about the grueling cross-country travel for some of the Celtics’ championship battles with the Lakers. So Celtics fans should be careful of disparaging to 2-3-2 format too loudly; it was their messiah who may have prompted the change.

The 2-3-2 format became one of the few things owners, who wanted to limit costs, and players, who didn’t like being crammed into tiny airline seats, could agree on. So it changed.

Things are different now. Teams fly charters, get plush accommodations in every city and now have an extra day between Games 6 and 7, if necessary, further lessening the impact of travel on their bodies. What’s more, money is no longer an object for the NBA, regardless of what owners might claim when it comes time to negotiate a new collective bargaining agreement. The entire series could be 1-1-1-1-1-1-1 and nobody would likely notice much drop-off in play and the league would not go bankrupt.

Like many concepts, the 2-3-2 was an idea that had outlived its time. But it did once make sense. Saying “It should have never changed” is at best an oversimplification and, at worst, false. For the NBA to grow and to satisfy its owners and players — its two most important stakeholders — the NBA had to implement such a format nearly two decades ago. Just because something doesn’t make sense anymore does not mean it never made sense at all. 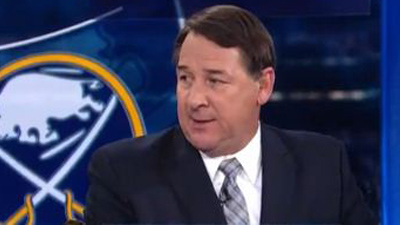 Mike Milbury Goes Off After Loui Eriksson Hit, Says John Scott, Ron Rolston Should Be ‘Out of This League’ (Video)