On Saturday, the Washington Capitals forward faced his former team for the first time since the Maple Leafs bought out the remainder of his contract this past summer, but his homecoming was a bit more bloody than he presumably expected.

As Grabovski made a diving attempt to get to the puck, David Clarkson‘s skate accidentally clipped the forward’s face on the follow-through of his stride, leaving Grabovski down on the ice with a puddle of blood quickly forming around him. Grabovski managed to skate off the ice under his own power, heading right into the dressing room with seconds remaining in the second period.

The vicious play didn’t mark the end of his night, however, as Grabovski received 20 stitches in the locker room and made his way back out onto the ice for the third period because, well, hockey.

Check out the play in the GIF below, with a fist bump to @cjzero. 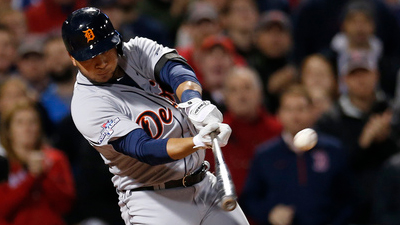