BOSTON — Jon Lester doesn?t want to trade in his threads.

Lester, who’s slated to hit free agency next offseason, made it abundantly clear Thursday that he wants to remain a member of the Boston Red Sox, even saying he?s willing to accept a hometown discount to stay with the team that drafted him in 2002.

?These guys are my No. 1 priority,? Lester said. ?I want to be here until they have to rip this jersey off my back.?

Lester is about to enter his ninth major league season and the final year of his current contract. The 30-year-old is a two-time All-Star with two World Series titles on his resume, and he?s coming off a strong 2013 season that was capped by a dominant postseason performance. It?s safe to assume Lester will be in line for a big payday if he hits the open market next winter.

Lester isn’t that interested in testing free agency, though. While the southpaw acknowledged Thursday that all agents typically like their clients to hit the open market in search of the biggest contracts possible, his heart — and his family?s hearts — resides in Boston.

?Since we broke Boston [after the World Series], all my son?s talked about is going home to Boston. He goes, ?I want to go home to Boston,? ? Lester said. ?This is our home. This is what my family knows. This is what we?ve become comfortable with. I understand what the market does, both in the free-agent market and when you don?t hit free agency and just do an extension. I would love to stay here, and we?ll see what happens.?

It?s unclear how much Lester would command in free agency, but given the lucrative deals that elite pitchers are receiving these days, it?s likely his next contract could surpass the $100 million mark. Clayton Kershaw?s seven-year, $215 million contract and Masahiro Tanaka?s seven-year, $155 million deal — while not perfectly comparable — are proof that the market is booming.

Lester said money isn?t the most influential factor in deciding his future. Sure, everyone wants to get paid. But Lester — as he put it — doesn?t want to accept a few extra dollars just to try something else, especially given how much he loves his current situation.

“I understand that to stay here, you’re not going to get a free-agent deal. You’re not going to do it. You can’t. It’s not possible. You’re bidding against one team,? Lester said. ?I understand you’re going to take a discount to stay. Do I want to do that? Absolutely. But just like they want it to be fair for them, I want it to be fair for me and my family. If we can get to something hopefully in spring training, that?s awesome. Like I said, I want to stay here.?

Red Sox second baseman Dustin Pedroia, whom Lester has developed a strong relationship with over the years, accepted a hometown discount this past season when he signed a seven-year, $100 million contract extension. Lester expressed a willingness to do the same.

?As a competitor, you always want to play for a competitive team,” Lester said. “I?ve never been that type of guy that?s going to take more money from somebody else to go south [in the standings]. I don?t want any of that. That?s no fun. I want to win, and if that means taking a Pedroia deal where you stay here for less money to be happy and to be competitive and to win every year, let?s do it. Let?s get it done.?

Red Sox general manager Ben Cherington also spoke with reporters before the Baseball Writers? Association of America awards dinner Thursday and reiterated that Boston would like to re-sign Lester, although the sides have not yet begun negotiations.

If the Red Sox ultimately tear the jersey off Lester’s back, he’ll have plenty of other jerseys waiting for him. However, the current uniform seems to suit Lester just fine. 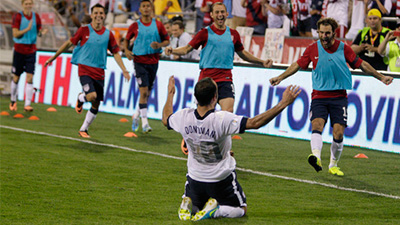 Landon Donovan: U.S. Expects to Advance Out Of World Cup ‘Group of Death’