Red Sox pitchers and catchers have officially started preparations in Fort Myers for the 2014 season, and talk has turned to the contract status of Red Sox ace Jon Lester.

Lester already has said he’d take a hometown discount to finish his career in Boston, and he reiterated that sentiment Monday when talking to reporters for the first time since the start of spring training. The free-agent-to-be wants to stay put, and he’ll do whatever it takes to make that happen.

“I?m not going to go back on what I said,” Lester said, via The Boston Herald. “I mean, I said what I said from the heart, and I mean it. We?ll see where it goes from there. … I mean, you guys have probably figured me out by now, I hope, that I usually don?t say things I don?t mean. I mean it. I want to stay here. This is all I?ve known.”

The Sox picked up Lester’s $13 million option for 2014 the day after the team’s World Series win, but Lester said he and the team haven’t talked about an extension beyond this season.

“I’ve got a year left on my contract,” Lester said. “I’m going to play it out. As far as us talking to the front office or anything, we haven’t sat down. I think there’s going to be a time and a place for that. That?s not really something I’m concerned about right now. I’ve got to be worried about getting ready for the season — physically and mentally getting ready for the season. The guys I pay to do that handle that and think about that. When things start happening, then I can make a decision from there.” 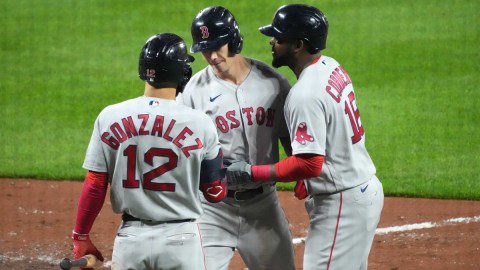