BOSTON — Some strange things have happened to the Boston Celtics this season, which certainly isn’t a surprise given their current state. A team can’t sink to the bottom of the worst division in basketball without having the ball bounce funny every once in a while.

Except this time, the weirdness was welcome. Locked in a tight game in which victory was far from assured, the Celtics were under control, executed on both ends and came out with a win.

In the grand scheme of this Celtics season, that amounted to an oddity. And it was all because of Rajon Rondo.

“Just the energy he gave us was amazing,” Celtics guard Avery Bradley said after the 96-89 victory over the Orlando Magic. “He was getting everybody involved, he was talking to everybody on defense, he was getting us together throughout the whole game, so we knew what we wanted to do on the offensive end. It was just amazing. I love playing with him, and I’m pretty sure everybody else does, too.”

Bradley’s glowing words were entirely deserved on a night in which Rondo owned the clutch. Granted, the outcome was buried under fodder for a devil’s advocate. It was the first win for the Celtics (16-33) in seven tries with Rondo in the lineup this season. The Magic (13-36) are terrible. It accomplished little beside moving Boston a half-game ahead of the Philadelphia 76ers into fourth place in the Atlantic Division. With most sports fans across the country preparing to watch Sunday’s Super Bowl, it’s safe to say hardly anybody outside the sellout crowd at TD Garden noticed Rondo’s performance.

But as they have since Rondo’s return, the Celtics exhibited a sense of calm in a close game. They showed the same in losses to the Los Angeles Lakers and these same Magic, but just didn’t hit enough big shots to get wins. With Rondo moving well and looking nearly as dynamic as he has in the past, the Celtics seemed to know they would run their offense and get quality shots. It was only a matter of hitting those shots.

“It does give you a sense of comfort going into those final few minutes,” Celtics coach Brad Stevens said, “that you’ve got a person directing for you.”

Not surprisingly, Rondo leaned on the teammates he has the most experience playing with. Jared Sullinger had a monster game with 21 points and 12 rebounds. Brandon Bass recorded 19 points and nine boards off pure hustle. Avery Bradley, who played for the first time after missing five games with a sprained ankle, scored 17 points.

Those three players featured prominently in Rondo’s immense fourth quarter. Rondo scored or assisted the Celtics’ last 21 points, except for a pass to Jeff Green for a long 2-pointer that wasn’t officially scored as an assist, for some reason. Sullinger, Bass and Bradley each had at least one big bucket, created by Rondo, in that stretch. Rondo is still learning the majority of his teammates, after all; it only made sense that he went with the ones he knows best.

“Honestly, you’ve got to think about this,” Sullinger said. “We played with [Jordan Crawford] for all those games. Then, getting used to Rondo, who is a little more pass-first than JC, it’s kind of hard to get used to that. It takes some time. We’ve played those games and there’s times where we’ve looked sloppy and there’s times where we’ve looked great. Now, I think, as a team we’re finally on the same page.”

Rondo’s typically brief postgame comments offered little in the way of illumination, as usual. He acknowledged this was the best he has felt “moving-wise” since he came back and that he was able to get to the rim better than he had in his previous six games. He did not take any larger message from the game, however, either for himself or for his team, both of which are just starting to figure out where they stand going into the final third of the season, starting with Wednesday’s game against the Sixers.

“It’s just one game,” Rondo said. “I made a lot of my shots. But I do feel comfortable around the basket. A lot of my flip shots went in. I take it one game at a time. We have a big game coming up in Philly and we need to take care of business and get a win.”

No team mired near the bottom of the standings, as the Celtics are, could ever be happy with where it sits. But after Sunday, with Rondo back running the show and making an impact in all the different ways he can, the Celtics can suddenly take comfort in the possibility that they might not be stuck at the bottom for long. 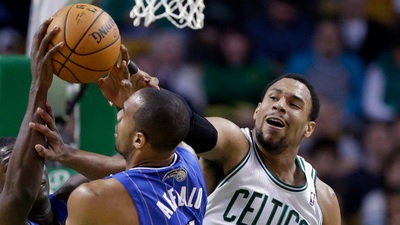 Jared Sullinger Listens To Dad; Other Impressions From Celtics’ Win Over Magic 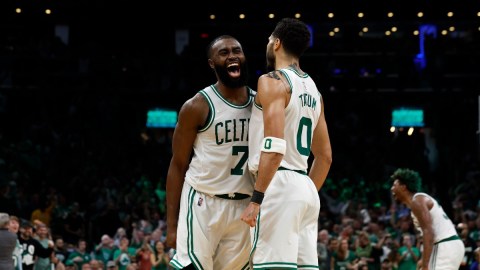