Jared Sullinger Listens To Dad; Other Impressions From Celtics' Win Over Magic - NESN.com Skip to content BOSTON — If there is any question as to how Jared Sullinger has so quickly assimilated into NBA life with so few hiccups, the answer came last week.

With Sullinger, in the midst of an overall outstanding sophomore season with the Boston Celtics, stuck in a relative rut, the authority figures in his life began issuing challenges from all angles. First came his coach, Brad Stevens, who has asked the second-year big man to play and lead well beyond what is asked of players with similar service time. Then came a three-pronged front from his family.

A coddling entourage, the Sullingers are not. His father, Satch, was the bluntest.

“He said my body language sucked, it looked like my attitude sucked, and that’s not what got you here,” Sullinger said. “He pretty much tried to whip me back into shape.”

In addition to dad, Sullinger’s brothers Julian and Jay had some harsh words as well. After posting 21 points and 12 rebounds in Sunday’s 96-89 win over the Orlando Magic, Sullinger referred to his brothers — not entirely affectionately — as his “other two fathers.”

“I’m fortunate to have three fathers in my life, technically,” Sullinger said, then added dryly, ” according to them.”

Sullinger certainly appears to have heeded their words. He was actually upset with himself following a 24-point, 17-rebound showing against the Philadelphia 76ers on Wednesday, because he shot a lousy 9-for-25 from the field and committed three turnovers — not to mention, his team lost. Stevens downplayed the uniqueness of his conversation with Sullinger, but it is obvious the coach would only place the bar so high for a player he believes can reach it.

“You coach guys, you meet with them every day, so it’s not that unusual an occurrence,” Stevens said. “But it is true, you know, people use youth as a crutch to say it’s OK to be inconsistent. I’m not saying he has been, I’m just saying in general. But this is a situation where youth should have a great opportunity. Now, they get a chance to separate themselves from other guys their age.”

Sullinger is separating himself from other players, but the most important way may be in how he does it off the court, rather than on it.

Avery Bradley was honest when he was asked if his sprained right ankle, which sidelined him for five games, was at full strength Sunday, when he played for the first time in a week and a half.

Bradley shared the starting lineup with Rajon Rondo for just the fourth time all season and only the 30th time in their careers. That’s a surprisingly low number for two players who have been teammates for four years.

Yet injuries — and, in a few cases, Rondo suspensions — have limited the amount of time the two have been able to share the court. They looked to be just fine as a duo against the Magic, as Bradley went for 17 points and Rondo finished with 19 points, 10 assists, six rebounds and three steals in a dominant performance. The individual statistics didn’t mean much to Bradley, though.

“I don’t think the numbers or anything helps my confidence,” Bradley said. “I think it’s more us getting a win more than anything. It’s something to build from. We’ve just got to keep getting better as a team.”

Sullinger owned the first 3 1/2 quarters and Rondo took over in the last six minutes, but Brandon Bass drew the greatest praise from his coach.

“I thought Brandon was huge [Sunday],” Stevens said. “We didn’t defend great on a couple of possessions late, but his activity, blocked shots, Rondo came up with a slap-away and Brandon came up with the loose ball, Brandon was just really locked in. I actually said that to [assistant coach] Jay Larranaga the first or second minute of the game. You could see he was locked in from the get-go. That’s what you need those guys to be for us to be successful, and I was happy for him because he played well.”

Bass ended up with 19 points, nine rebounds and one blocked shot, but many of his contributions came on plays that didn’t crack the box score. He saved a ball that was going out of bounds to extend a first-quarter possession and tracked down the Rondo steal Stevens mentioned. He was also the Celtics’ sharpest big man in help defense, as he often is.

With the way the Celtics have struggled in first quarters all season, Bass tried to inject some life into his team early. He took care of the little things against the Magic, which freed up Rondo and Sullinger to take care of the big things.

Report: Broncos Might Not Re-Sign Eric Decker, View Him As No. 2 Receiver 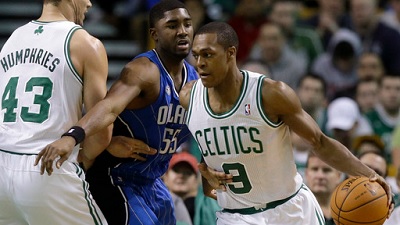