BOSTON — Things got ugly for the Red Sox on Thursday. Very ugly.

The Red Sox were pulverized by the New York Yankees in the teams’ series finale at Fenway Park. Boston committed five errors and produced just four hits in a 14-5 loss.

The Red Sox now head to Toronto for three games against the Blue Jays. Let?s first go over some notes from Thursday’s disaster.

— The Red Sox?s defense was worse.

The Red Sox’s five errors marked their most in a single game since April 28, 2001. Xander Bogaerts, Dustin Pedroia, Jackie Bradley Jr., Brock Holt and Doubront each were charged with an error.

Catcher David Ross was charged with a passed ball in the loss.

— The Red Sox?s offense couldn?t get much going against CC Sabathia despite driving up his pitch count early.

Sabathia lost control on occasion — walking three and hitting two batters — but he exited after six innings in which he allowed just two runs on three hits while striking out eight.

— Mike Napoli extended his career-high on-base streak to 19 games with a walk. Napoli finished 0-for-4.

— Shane Victorino, who was activated from the 15-day disabled list Thursday, went 1-for-5 with a double and a run scored in his first regular-season game of 2014.

— Yangervis Solarte, one of five Yankees players with at least two hits, drove in four runs.

— Burke Badenhop was solid in relief. He tossed 2 2/3 scoreless innings, allowing just one hit and one walk.

Badenhop has allowed just one earned run over his last 9 2/3 innings (five appearances) after a rocky start to the season.

— Craig Breslow struggled mightily in the seventh inning, even though the defense behind him didn?t help. The southpaw surrendered five runs (four earned) on five hits and three walks in his inning of work.

— Thursday’s game was so out of hand that Mike Carp pitched.

Carp allowed one run on five walks in the ninth inning. He threw 38 pitches (15 strikes) and even induced a ground-ball double play before running into control issues.

?It was fun,? Carp said. ?It was a rough ballgame. But like I said, (it was fun) just to get out there and kind of have your little kid?s dream, to pitch at the big league level, especially as a hitter.?

Carp threw fastballs and knuckleballs in his major league pitching debut. One could argue the Yankees should have been a little more aggressive about swinging at close pitches, but Carp had a simple excuse for New York’s patient approach.

?Hopefully, that?s because of the movement on the ball,? Carp joked.

Carp became the first position player to pitch for the Red Sox since Darnell McDonald did so on May 6, 2012.

— So, what do the Red Sox need to do to turn things around after a 10-13 start? Manager John Farrell has an idea.

?It?s got to be led by our starters,? Farrell said. ?That?s where, to me, any continuity and consistency can originate from; it?s that group. And that?s not to place added pressure on them. That?s just to say that in past years and situations or stretches of games where you see it like this, it has to come from the starting rotation to set the tone.?

— Brock Holt was optioned to Triple-A Pawtucket after the game to make room for Will Middlebrooks.

Red Wings Will Start Jonas Gustavsson Against Bruins In Game 5 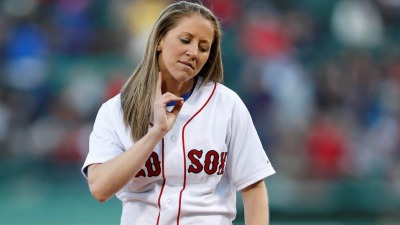