The NHL meted out its punishment on Minnesota Wild forward Matt Cooke for his hit on Colorado Avalanche defenseman Tyson Barrie, and Patrick Roy was not pleased with the result.

The Avs head coach took offense to Cooke’s seven-game suspension during his weekly radio show appearance on Colorado’s 104.3 The Fan.

“It’s never enough when you’re losing a player like Tyson Barrie,” said Roy. “It doesn’t replace the player… These are the cheap shots our game does not need.”

Barrie, the Avalanche’s top defenseman, will miss four-to-six weeks for a knee injury suffered on a hit from Cooke during Game 3 of the Western Conference quarterfinal series on Monday night. Cooke will sit out the remainder of the series but could return in the next round of the Stanley Cup playoffs if the Wild are able to advance.

Roy had more to say about the matter in a press conference Thursday at Xcel Energy Center prior to Game 4 of the series, which Colorado leads 2-1.

“No matter how many games, that does not replace the player,” said Roy. “Tyson is very valuable to us, very important to us, and it doesn’t matter if it’s five games, 15 games, 20 games ? we won’t play with Tyson tonight and that’s what we’re thinking.”

Keep your heads on a swivel, Wild players. 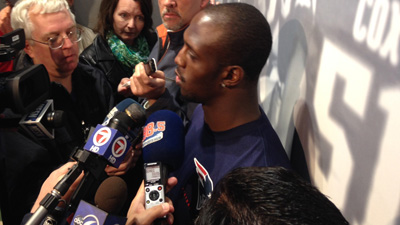