Cristiano Ronaldo’s fans are seeing him as they’ve never seen him before.

Ronaldo and his supermodel fiancée, Irina Shayk, appear in the June 2014 issue of “Vogue Espana” magazine. Ronaldo posed naked for the cover photo, while a dress-bearing Shayk stood in front of the Portuguese superstar, covering his private parts.

The coverline, “Amor & Fútbol” (“Love and Football” in English), is pretty self explanatory.

The Vogue Espana spread is the first time Ronaldo and Shayk have modeled together. Judging by the buzz this issue is generating, it’s safe to say it won’t be their last time. 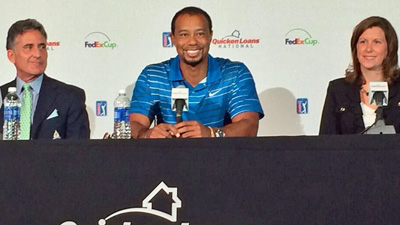 Tiger Woods Feared Golf Career Was Over, Has ‘No Timetable’ For Return