The New England Patriots are bringing back all five starters on their offensive line for the second consecutive year, but some of those players aren’t entering the spring with their jobs locked down.

The Patriots came out of the 2014 NFL draft with three new offensive linemen: center Bryan Stork, tackle Cameron Fleming and guard Jon Halapio. Coach Bill Belichick said in his post-draft news conference that Fleming and Halapio were value picks, but the team obviously believed a major need needed to be filled along the O-line.

Check out how the Patriots stack up on the offensive line.

Mankins and Vollmer are All-Pros, and Solder is one of the best young tackles in the NFL, so the left tackle, left guard and right tackles jobs are locked down. Cannon is a solid reserve who can fill in at guard or tackle, and though he hasn’t emerged as a starter, his versatility is needed. It would take a very poor spring and summer for Stork or Fleming to be released after being selected in the fourth round.

Stork has a chance to compete with Wendell for the starting center job. Wendell was fantastic in 2012, but his play dropped off in 2013. The seven-year pro will have to come into the spring and summer playing at his 2012 level to ensure the starting job.

Fleming played right tackle at Stanford but wanted to prove during the pre-draft period that he also could play left tackle. He stressed during his post-draft conference call that he doesn’t have experience at guard, though the Patriots might want to give him some versatility during OTAs, minicamp and training camp.

Connolly and Wendell are likely to make the Patriots’ roster, but they’re each making high salaries with little guaranteed money. Connolly’s salary-cap hit is $4.083 million with just $1.083 million guaranteed, and Wendell is earning $3.625 million with just $850,000 guaranteed. They have to earn their roster spots before the 2014 season, since the Patriots could save so much money by releasing either player.

Halapio and Kline should be likely to make the roster, but there’s so much competition at the position that there will be one or two surprise cuts. The Patriots carried eight offensive linemen in 2013 and nine in 2012. That means one or two of Connolly, Wendell, Halapio and Kline could be waived before the 2014 season.

Halapio played right guard at Florida, and Kline proved last season that he could fill in at left guard, right guard or center. Among the Patriots’ offensive linemen, Stork, Fleming, Halapio, Kline, Barker, Cave, Devey and Mattes have practice-squad eligibility, though this year’s draft picks are less likely to pass through waivers to get to the practice squad.

The Patriots are hoping that competition along the offensive line breeds success in 2014. The team is in a win-win situation, since it’ll have the option of bringing back all five starters from 2012 and 2013, or it’ll be able to improve the line with some young talent. 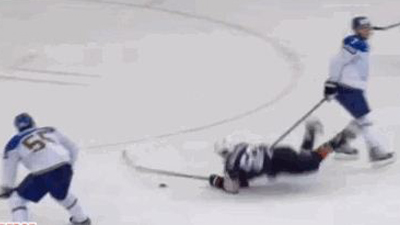 Johnny Gaudreau Sets Up U.S. Goal With Pass From On His Stomach (GIF)