The Boston Red Sox will be honoring two events this holiday weekend.

The Red Sox will celebrate the Fourth of July while also commemorating the 75th anniversary of Lou Gehrig’s farewell speech to baseball, which took place at Yankee Stadium on July 4, 1939, during pregame ceremonies on Friday, July 4, before the 1:35 p.m. game against the Baltimore Orioles.

The giant American flag will be draped across the Green Monster, patriotic music will be played and Colonel Lester A. Weilacher, Commander of the 66th Air Base Group at nearby Hanscom Air Force Base, will be honored by throwing out the ceremonial first pitch.

The Red Sox will also recognize patients battling amyotrophic lateral sclerosis (ALS), as the league opens an initiative to heighten awareness about the disease. The patients’ children will be invited on the field to say “Play Ball.”

Opera-trained rock star Alexander Kariotis, who lost his brother to ALS, will perform the National Anthem, while Wrentham, Mass. Little League coach Tim Gemelli, who was diagnosed with ALS last October, will also throw a ceremonial first pitch. Gemelli’s little leaguers, the Hockomocks, will then take the field with the Red Sox.

The ALS Association, ALS Therapy Development Institute, and Muscular Dystrophy Association will be recognized on the field.

Cassie Jordan, a 16-year-old from Middleboro High School, will perform “God Bless America” during the 7th inning stretch as part of “Calling All Kids Month,” presented by Hood. 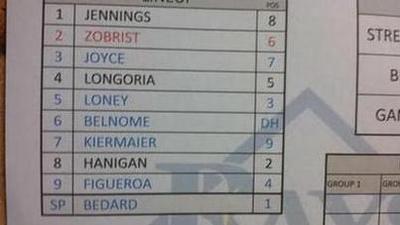