Peyton Manning put up the most fantasy points in 2013, but he likely won’t be the top player off your draft board this year.

That honor should fall to a running back, which arguably is the most important position in fantasy football. As in seasons past, the upper echelon of ball carriers is loaded in 2014, with the smallest of margins separating the top three backs.

The rest of the pack isn’t far behind, though, and choosing the right first-tier running back at the right time should give you a major leg up in your quest for glory.

Let’s start from the top.

1. LeSean McCoy, Philadelphia Eagles (Bye week: 7)
Why McCoy over Peterson or Charles? One word — touches. McCoy led all running backs with 314 carries in 2013 and added 52 receptions to boot. Even with Darren Sproles in the mix, McCoy will continue to shoulder a heavy load and put up monster numbers in Chip Kelly’s high-powered offense.

2. Adrian Peterson, Minnesota Vikings (10)
The sun will rise in the morning, and Adrian Peterson will rush for 1,000-plus yards and double-digit touchdowns. Peterson is getting older (29), but he’s still the best running back in the game, and new offensive coordinator Norv Turner should help keep the veteran’s production at an elite level.

3. Jamaal Charles, Kansas City Chiefs (6)
Charles put up nearly 2,000 total yards and scored 19 touchdowns in 2013. He easily could repeat that production in 2014, but Kansas City lost three key offensive linemen this offseason and will play four games against the NFC West’s vaunted defenses.

4. Matt Forte, Chicago Bears (9)
Forte has a tendency to fly under the radar. He shouldn’t. Chicago’s offense puts up points in bunches, and Forte took a league-high 72 percent of his team’s rushing attempts last season. Add in his ever-present threat as a receiver, and Forte clearly is among the NFL’s elite.

5. Marshawn Lynch, Seattle Seahawks (4)
“Beast Mode” is the featured back in a run-heavy offense and excels in goal-line situations. The only cause for concern could be that Lynch takes a beating in the defensively loaded NFC West, but that hasn’t stopped him yet.

6. Eddie Lacy, Green Bay Packers (9)
Lacy’s Rookie of the Year campaign in 2013 suggested he could be destined for fantasy greatness. Yet the 24-year-old did much of his work with Aaron Rodgers on the sidelines, so don’t expect Green Bay to rely as heavily on Lacy this season. Don’t let us mislead you, though — he’s still easily a top-10 talent.

7. Arian Foster, Houston Texans (10)
With a new head coach and a healthy set of legs, Foster deserves another shot from fantasy owners. He’s one of the league’s elite backs when healthy, and a weak passing game and Ben Tate’s departure means the Texans’ offense will move through Foster.

8. Montee Ball, Denver Broncos (4)
Peyton Manning can’t pass on every play. We saw what Knowshon Moreno did in 2013 (14.8 fantasy points per game, 5th in the NFL) and the NCAA leader in career touchdowns certainly has the talent to pick up where Moreno left off.

9. DeMarco Murray, Dallas Cowboys (11)
Another injury-prone back, Murray has the potential to be a top-five ball carrier when healthy. He has missed at least two games in all three of his NFL seasons, but if you’re willing to take a gamble, Murray could pay huge dividends.

10. Giovani Bernard, Cincinnati Bengals (4)
Bernard will split carries with BenJarvus Green-Ellis, so don’t expect a major rushing output. The 22-year-old is a dangerous weapon in the pass game, though, and with Hue Jackson at the helm of the Bengals’ offense, Bernard should be given many more chances to shine.

Curt Schilling Reveals He Was Diagnosed With Mouth Cancer (Videos) 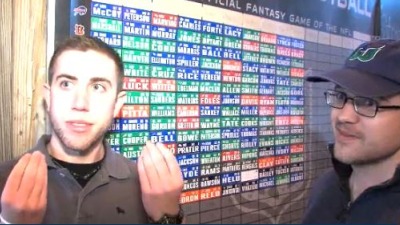