INDIANAPOLIS — Paul George beat the odds to become an NBA star. He’ll have to do it all over again to play next season.

Two weeks after a gruesome compound fracture of his right leg, George said Friday he remains hopeful that he can make it back onto the court late next season even though it’s a longshot. George called the injury a “freak accident.”

“All I can do at this point is sleep, watch TV and lay down, so it’s tough for me. I’m used to being active, lifting weights, being in the gym,” George said as his mother and father watched his news conference from a few feet away. “At the same time, I want to be part of this team. The last thing I want to do is feel like I’m not part of this team because I’m out. I’m holding out hope, just personally, because I want to be back.”

George has thrived in the underdog role, going from mostly overlooked prep recruit to Fresno State star. He was impressive enough in college to catch the attention of Pacers president of basketball operations Larry Bird, who took him No. 10 overall in 2010. After his third season in the league, George was named the NBA’s Most Improved Player. He’s led the Pacers in scoring, played in the All-Star Game and made the league’s all-defensive team each of the past two seasons.

Paul was injured Aug. 1 during a U.S. national team scrimmage in Las Vegas when he his right leg collided with the basketball stanchion, snapping it in two.

George said he has watched the replay once and won’t watch it again.

Doctors have told the 24-year-old star that he is likely to make a full recovery, though it will take a full year. Bird and coach Frank Vogel said earlier this week they did not plan to have George in 2014-15.

George said he thinks he can change those plans — if he can avoid risking another injury.

George said doctors placed pins in his knee and ankle to stabilize a rod that was inserted into the injured leg, which was broken in two places. Three days later, he returned to his suburban Indianapolis home where is now recuperating in a cast and hobbling around on crutches.

While no firm timetable has been set for his return, George said he could begin strengthening his right knee as early as next week. That’s little consolation to the workaholic.

“This was going to be a huge year for me, so for me not to be out there at the beginning, I do feel a little guilty about that,” George said. “It hurts.”

Steve Smith: Ravens Will Break Your Spork And Leave You With No Lunch 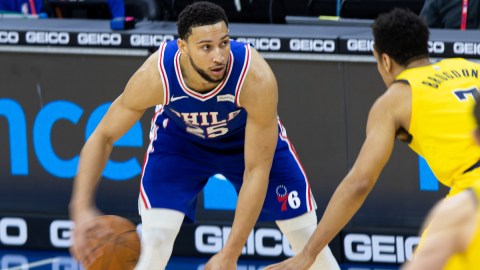 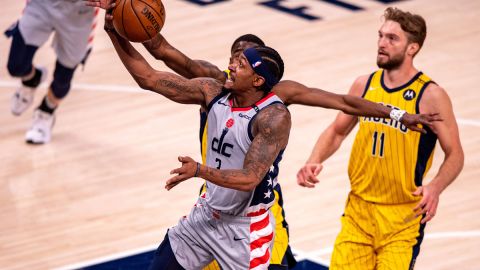