The Hawks are a surprising juggernaut this season, entering Wednesday with the league’s best record and wins in 20 of their previous 22 games. The Celtics are a middling squad grappling for playoff and/or lottery position. (No one’s quite sure which one yet)

Throw these teams into a seven-game series, and good money says Atlanta would be the one coming out victorious in a head-to-head matchup. But crazy things can happen on a given night in the NBA.

Crazy things like what Celtics fans witnessed Wednesday at TD Garden, when their team, in its final game before the All-Star break, couldn’t find the basket with a map but still managed to topple the mighty Hawks by a final score of 89-88.

The Hawks certainly didn’t play their best game — as Celtics coach Brad Stevens noted multiple times in his postgame news conference — but neither did the C’s.

Boston was atrocious shooting the basketball, failing to crack 30 percent from the floor for much of the night. (They finished at 32.3, the lowest by a winning Celtics team since 1965, per ESPN Stats and Info.) They managed to put just 34 points on the board before halftime. Point guard Marcus Smart (3-for-12, three assists, four turnovers) had what Stevens called one of his worst games as a pro.

Yet, they found a way against an opponent that has been Godzilla to the rest of the NBA’s Tokyo since the start of 2015.

The Celtics outscored the Hawks in each of the final two quarters and allowed just 16 points in the fourth. Smart, who was benched in favor of Marcus Thornton to begin the second half, came alive late, making a layup to cut Boston’s deficit to five with 3:21 to play and a 3-pointer two possessions later to trim it to two.

It was the type of hard-fought, grind-it-out win that has eluded the Celtics for much of this season, and one that puts them in the best possible position entering their eight-day layoff.

?I think it says a lot for us as a team,” said guard Evan Turner, who drained the game-winning shot with less than a second remaining. “We were able to come back against the best team in the league — down 20, we shot, like, 30 percent. I think once we (can) put to together a whole game — put together both a defensive and offensive game — we?ll be alright. It?s a great win, and it’s always better to go into break on a win and not a loss. It?s huge.?

Exactly how huge the win was will becoming more apparent in the coming weeks. The Celtics have some decisions to make over the break — namely, whether to continue their pursuit of a playoff spot (1 1/2 games separate them from the eighth seed) or to ship off one or more of their few remaining veterans before next Thursday’s trade deadline, all but assuring a second consecutive lottery finish.

After last year’s deadline, the C’s went on to lose 22 of their final 28 games.

That’s a matter for Danny Ainge & Co. to concern themselves with, though. The Celtics players are focused on enjoying this win, getting some much-needed rest and then aiming their eyes toward their goal of making the postseason. 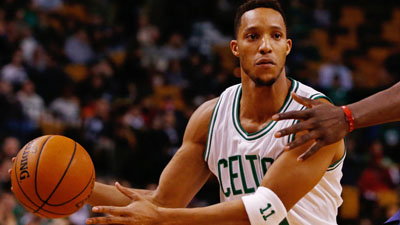 Bill Belichick Taunts Colts Fan David Letterman: ‘It Was Only A 38-Point Win’