The Boston Celtics’ aspirations of a perfect road trip were dashed Sunday in Orlando.

After topping the New Orleans Pelicans on Friday, Boston opened up a big lead on the Magic in the first half but could not protect it in an eventual 103-98 loss.

HOT START
The Celtics led by as many 20 early in the second quarter, but some cold Boston shooting over the remainder of the frame allowed the Magic to climb back into the game. Orlando cut the deficit to three with 2:10 to play before halftime, but five late points by Isaiah Thomas gave the Celtics a bit of a cushion as they headed into the break up 49-43.

Thomas struggled from the floor in the game (5-for-14) but otherwise was productive, racking up 21 points, nine assists, five rebounds and two steals.

The Magic hung in there throughout the third, however, and grabbed their first lead with just over four minutes remaining in the quarter.

GIGI TIME
With Orlando leading 66-61 late in the third, Celtics coach Brad Stevens opted to give forward Luigi Datome some run. Datome has played only sparingly since being acquired at the trade deadline (19 minutes, to be exact, 15 of which came in Boston’s blowout loss to the Cleveland Cavaliers), but he immediately contributed, drilling a 3-pointer from the right elbow in his first minute of action.

Datome wasn’t done, though. He came up with a baseline dunk off a nice recovery by Thomas and nailed a Dirk Nowitzki-esque one-footed jumper (which later was waved off after referees determined the shot clock had expired).

Datome logged just 10 minutes in the contest but finished with 10 points on 4-of-5 shooting to go along with two blocks.

Speaking of rebounds, Orlando big Dewayne Dedmon had a career night of his own in place of injured starter Nikola Vucevic. Dedmon’s 11 points and 16 boards both were career highs for the 25-year-old.

SMART V. PAYTON
This game featured a matchup between two of the NBA’s most promising young point guards in rookies Marcus Smart and Elfrid Payton.

Smart started the evening off with a bang, making three triples and coming up with three steals in the first quarter alone. He ended up going 4-for-9 from deep to finish with 16 points, five rebounds, two assists and five steals.

Smart’s performance was without mistakes, though. He had an ill-advised pass picked off by Maurice Harkless as part of 10-0 run that allowed the Magic to pull away in the final minutes and later earned his first NBA ejection when his offensive foul with 28 seconds to play was upgraded to a flagrant 2 upon video review.

Payton had a solid showing, as well, nearly reaching triple-double territory. Like Bass, he notched a new career high with 10 rebounds to go along with 19 points and seven assists.

Up next: Playoff positioning will be on the line Monday night as the Celtics finish off their road trip with a visit to the Miami Heat. 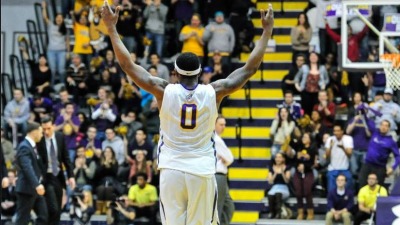