Tom Brady hit Rob Gronkowski with a perfect 40-yard pass on fourth-and-10, then went back to his tight end on fourth-and-goal for a 4-yard touchdown pass with 17 seconds remaining. But Brady’s two-point conversion pass was deflected and intercepted by Bradley Roby, sealing New England’s fate in the AFC Championship Game.

The Broncos advance to Super Bowl 50 to take on the winner of the Carolina Panthers-Arizona Cardinals NFC Championship Game.

Fourth quarter, 2:18, Broncos 20-12: The Patriots’ offense stalled in Denver’s red zone for the second time in as many drives.

Danny Amendola dropped a potential first-down pass on third-and-6 from the 16-yard line, and Tom Brady’s end-zone heave to Rob Gronkowski on fourth down fell incomplete.

Fourth quarter, 4:35, Broncos 20-12: The Patriots got the stop they needed, forcing a Broncos three-and-out and punt to get the ball back at their own 29-yard line.

Fourth quarter, 5:56, Broncos 20-12: The Patriots finally put a drive together but couldn’t put points on the board.

New England drove all the way down to the Broncos’ 16-yard line, but Chris Harris Jr. tackled Julian Edelman short of the first down on fourth-and-1 to give the ball back to Denver.

Fourth quarter, 10:02, Broncos 20-12: The Broncos put points on the board but still let the Patriots off the hook.

C.J. Anderson ripped off a huge 30-yard gain on third-and-1 to put Denver in field-goal range. The Broncos had a great chance to score a touchdown, but Peyton Manning overthrew Jordan Matthews on third-and-goal, forcing Denver to settle for a 31-yard field goal.

Third quarter, 0:16, Broncos 17-12: The Patriots managed two first downs to get out of their own end zone but were forced to punt after a sack by Von Miller on third down. Miller and Patriots linebacker Jamie Collins are dominating this game so far.

Third quarter, 2:35, Broncos 17-12: The Broncos are keeping the Patriots in this game after going three-and-out once again. They are winning the field-position battle, however. The Patriots have the ball on their own 4-yard line.

Third quarter, 5:14, Broncos 17-12: The Patriots failed to take the lead, going three-and-out with a sack by Von Miller, a 3-yard run by Brandon Bolden and a 3-yard catch by James White.

Third quarter, 6:42, Broncos 17-12: The Patriots’ defense bent a little, but it did not break, forcing a punt after a seven-play drive. The Patriots have a chance to take a lead here.

Third quarter, 10:26, Broncos 17-12: The Patriots have begun chipping away at the Broncos’ lead with a 38-yard field goal by Stephen Gostkowski. Rob Gronkowski had a 31-yard catch-and-run, then stayed on the sideline drinking water for the next five plays. Gronkowski is standing near trainers flexing his left hand.

Third quarter, 13:15, Broncos 17-9: The Patriots certainly started the third quarter off right, forcing a three-and-out, largely thanks to a 13-yard sack by Jamie Collins.

End half, Broncos 17-9: Tom Brady took a knee, and we go to the half with the Broncos leading by eight. Where, oh where, did the Patriots’ offense go? Perhaps they’ll find it in the locker room.

Second quarter, 0:33, Broncos 17-9: The Patriots forced the Broncos to settle for a field goal, which is a small victory in an ugly game.

Second quarter, 1:46, Broncos 14-9: The Patriots got nowhere with another three-and-out. After the punt, the Broncos have great field position, with the ball on their own 44-yard line.

Second quarter, 2:27, Broncos 14-9: The Patriots forced another three-and-out after a false start by the Broncos on first down, followed by a 12-yard sack by Alan Branch, an incomplete pass and a 7-yard run. The Patriots have the ball on their own 12-yard line.

Second quarter, 4:08, Broncos 14-9: That drive certainly didn’t go as planned. After two runs, Tom Brady threw a deep ball picked off by Broncos safety Darian Stewart. The Broncos have the ball on their won 44-yard line.

Second quarter, 5:21, Broncos 14-9: The Patriots forced a three-and-out and have the ball on their own 41-yard line after an unsportsmanlike conduct penalty on Broncos defensive back Kayvon Webster during the punt.

Second quarter, 7:02, Broncos 14-9: The Patriots cut the Broncos lead to five with a 46-yard field goal by Stephen Gostkowski.

Second quarter, 13:46, Broncos 14-6: The Patriots let up another touchdown, and at this point, they’re lucky to only trail by one score.

Second quarter, 14:35, Broncos 7-6: Tom Brady just threw an interception directly to Von Miller. He tripped, and the Broncos have the ball on the Patriots’ 16-yard line. Woof.

End first quarter, Broncos 7-6: The Patriots’ third-down defense has left something to be desired so far. Peyton Manning just threw a 34-yard completion to Emmanuel Sanders over Malcolm Butler. It was a nice throw and great coverage but an unbelievable catch by Sanders.

First quarter, 1:49, Broncos 7-6: Brady completed a 20-yard pass to Brandon Bolden. Broncos safety T.J. Ward was flagged for a personal foul on a late hit, moving the ball to the Denver 1-yard line. Patriots running back Steven Jackson then ran it in for the touchdown.

Stephen Gostkowski missed the extra-point attempt, so the Broncos still have the lead.

First quarter, 2:23, Broncos 7-0: The Broncos turned the ball over when Peyton Manning threw an incomplete lateral — aka a fumble — to Ronnie Hillman.

It first was ruled an incomplete pass, then Bill Belichick challenged the call and it was overturned. Jonathan Freeny picked up the ball and ran it into the end zone. The whistle was blown before he got the touchdown, so the Patriots have the ball at their own 22-yard line.

First quarter, 3:08, Broncos 7-0: The Patriots ripped off a 5-yard run to start the drive, but Bryan Stork drew a personal foul when he head-butted Broncos defensive tackle Vance Walker. The Patriots went three-and-out after being pushed back 15 yards.

The defense forced a three-and-out, and the Patriots have the ball back at their own 40 after a nice 28-yard return by Danny Amendola.

First quarter, 6:40, Broncos 7-0: The Patriots’ offense officially is off to a slow start. New England just went three-and-out on its second drive. Rob Gronkowski was bear-hugged by Denver safety T.J. Ward on third down but didn’t draw the flag. Questionable no-call there by the refs.

First quarter, 7:32, Broncos 7-0: The Broncos’ offense looks for real so far, as they just drove 83 yards down the field with ease. Peyton Manning was 4-of-6 passing for 60 yards, and he capped the drive with a 21-yard touchdown pass to tight end Owen Daniels.

First quarter, 13:12: The Patriots were forced to punt after taking the ball first. Brady was 2 of 4 for 13 yards, with completions to Julian Edelman and Rob Gronkowski.

The Broncos have the ball on their 17-yard line after Ryan Allen’s punt.

First quarter, 15:00: The Patriots won the toss and chose to receive. Big surprise. They usually defer.

Julian Edelman, as usual, is FIRED UP. pic.twitter.com/GguDLTWJGq

Brady warming up next to Caserio. pic.twitter.com/xw1RHQjpgy

I wonder how many times this guy has to turn around to explain his funny joke. pic.twitter.com/hNc9qELGU7

Edelman, Amendola and Keshawn back receiving punts during warmups. Slater back for kickoffs.

Of the Patriots’ seven inactives, five are healthy scratches.

Here are the Broncos’ inactives:

12:52 p.m.: With a little more than two hours before game time, here’s some pregame reading:

Brock Osweiler had a 7.5 passer rating targeting Demaryius Thomas in Wk 12. Find out how the Patriots shut him down. https://t.co/oYwYFcBf9S

Patriots-Broncos Tale Of The Tape: New England Has Edge At Safety, QB https://t.co/GCTYvdFnAI

Patriots? Dont?a Hightower: Run Defense Is ?No. 1 Thing I Take Pride In? https://t.co/7pKHcgGPFI

12:45 p.m. ET: The New England Patriots are well-stocked to avenge their Week 12 loss in today’s AFC Championship Game against the Denver Broncos.

The Patriots listed 21 players on their injury report Friday, but they’re significantly healthier than they were when they played the Broncos during the regular season. Wide receivers Julian Edelman and Danny Amendola and linebacker Jamie Collins all are expected to play after missing the 30-24 Week 12 loss. Tight end Rob Gronkowski and linebacker Dont’a Hightower, both of whom suffered injuries during the regular-season matchup with the Broncos, also should play.

The Broncos will go with quarterback Peyton Manning, not Brock Osweiler, their Week 12 starter. They’ll also have pass rusher DeMarcus Ware, who didn’t play during the Broncos’ 2015 matchup with the Patriots.

Broncos cornerbacks Chris Harris and Bradley Roby are banged up, so covering Edelman and Amendola could be difficult.

The Patriots are favored by three points this afternoon despite losing to the Broncos less than two months ago. 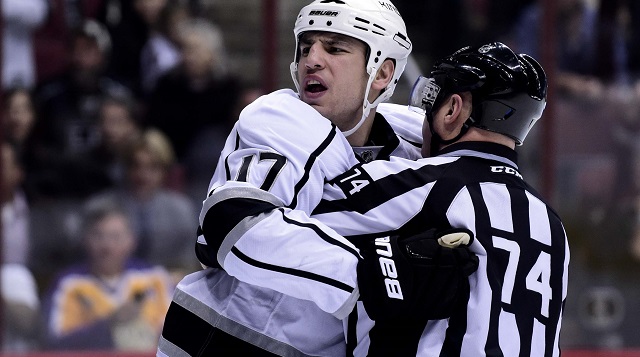 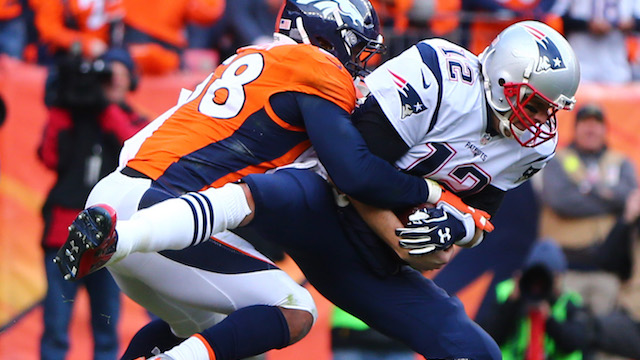