With any luck, your team was able to ride Le’Veon Bell’s marquee day or Aaron Rodgers’ dismantling of the Seattle Seahawks to a first-round victory in your fantasy football playoffs.

If you’re among the lucky few still standing in your league, it’s time to think about the tough decisions you have to make before your Week 15 matchup.

When you are this close to fantasy football’s Holy Grail, the willingness to drop a player who simply isn’t pulling his weight could mean the difference between taking home the hardware and waiting until next year. With that in mind, here are the five players you should consider dropping heading into Week 15.

Jarvis Landry, WR, Miami Dolphins
Quarterback Ryan Tannehill’s favorite target has had a sluggish production pattern over the last six weeks. Despite being the Dolphins’ top target, Landry only has found the end zone once over that time period, and has failed to eclipse the century mark in yardage since Week 3. Landry’s value dipped further Sunday when Tannehill went down with a sprained ACL and MCL. With Matt Moore likely playing the rest of the season, expect the Miami receiver to put up subpar numbers.

Russell Wilson, QB, Seattle Seahawks
Wilson was absolutely abysmal at Lambeau Field on Sunday, when he threw five interceptions in the Seahawks’ blowout loss to the Green Bay Packers. His poor performance Sunday isn’t the only reason you should be looking elsewhere for a quarterback. Wilson hasn’t thrown multiple touchdown passes since Week 10 in New England and will face a good Los Angeles Rams defense in Week 15 followed by the Arizona Cardinals in Week 16. It’s time to say goodbye.

Spencer Ware, RB, Kansas City Chiefs
Despite getting the bulk of the carries, Ware failed to gash an Oakland Raiders defense that is allowing the most yards per carry in the league. Ware has unfavorable matchups the next two weeks against the Tennessee Titans and a Denver Broncos defense that held him to 64 rushing yards in Week 12. On top of that, he hasn’t eclipsed 100 yards since Week 3, so let your fantasy team find someone else to tote the rock.

Brandin Cooks, WR, New Orleans Saints
The Saints’ offense has struggled the last two weeks. as quarterback Drew Brees became the first player to throw for zero touchdowns and three interceptions in consecutive games since Tyler Palko in 2011. Cooks also hasn’t scored since Week 10 against Denver and has difficult matchups the next two weeks against the Cardinals and the Tampa Bay Buccaneers, who held him to 61 receiving yards this past week.

Jason Witten, TE, Dallas Cowboys
The Cowboys tight end hasn’t been a favored target of rookie quarterback Dak Prescott, as he hasn’t caught more than six passes since his Week 9 outburst against the Cleveland Browns. Coincidentally, that also the last time Witten found the end zone, so it might be time to look elsewhere for your tight end needs.

Click for the best waiver wire adds for Week 15 >>

New NFL Pro Bowl Skills Showdown To Include Dodgeball, Because Why Not? 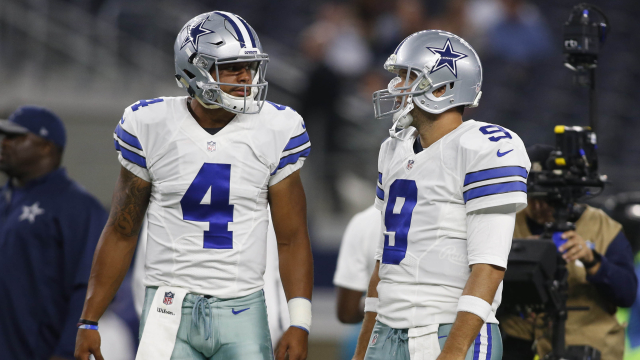