Final, Patriots 34-16: The New England Patriots are headed to the AFC Championship Game for the sixth consecutive season.

Running back Dion Lewis led the way with three touchdowns (one receiving, one rushing and one on a kickoff return) for the Patriots, who survived a rough first half to put away the Houston Texans.

Tom Brady had far from his best game under center for New England (18 of 38, 287 yards, two touchdowns, two interceptions), but he was far better than his Houston couterpart. Brock Osweiler threw three interceptions in the loss, one each to Logan Ryan, Devin McCourty and Duron Harmon.

The Patriots’ next opponent will be the winner of Sunday night’s divisional-round playoff game between the Kansas City Chiefs and Pittsburgh Steelers.

Brock Osweiler threw a pass directly into the stomach of Patriots safety Duron Harmon — the third interception of the day for the Texans quarterback. A few Patriots first downs will shut the door on Houston’s season. — Z.C.

The Patriots endured a brief injury scare during their last drive, as tight end Martellus Bennett went down clutching his knee after landing awkwardly on the Gillette turf. He was attended to by team trainers but jogged off the field and returned a few plays later.

Dion Lewis also fumbled during the drive, but the Patriots recovered the ball. — Z.C.

Fourth quarter, 12:16, Patriots 31-16: A roughing-the-passer call on Jadeveon Clowney helped the Patriots move the ball into Texans territory, but their drive stalled at Houston’s 45, resulting in a Ryan Allen punt.

The ensuing Texans possession lasted only one play, however. A Brock Osweiler pass deflected off the hands of DeAndre Hopkins and into the arms of Logan Ryan, who returned it to the Texans’ 6.

Two plays later, Dion Lewis bulldozed his way into the end zone for his third touchdown of the night.

Lewis is the first player in NFL history to score a receiving touchdown, a return touchdown and a rushing touchdown in a single playoff game. — Z.C.

Third quarter, 0:41, Patriots 24-13: Tom Brady now has thrown as many interceptions in this game as he did in 12 regular-season contests. He was picked off by Andre Hal after the pass clanged off Texans linebacker Benardrick McKinney’s fingertips.

Third quarter, 2:01, Patriots 24-13: There was some very poor officiating on that last drive, which resulted in a punt.

Third quarter, 5:56, Patriots 24-13: The Patriots shot themselves in the foot with an offensive pass interference penalty and otherwise couldn’t really move the ball on offense.

Ryan Allen’s punt was caught and downed by Matthew Slater at the 2-yard line, however. So the defense is in good position.

Wide receiver Chris Hogan left for the locker room during the drive with a thigh injury. He’s questionable to return.

Third quarter, 7:19, Patriots 24-13: And the Patriots’ defense is looking pretty good, too. Devin McCourty just picked off Brock Osweiler on a pass attempt to DeAndre Hopkins.

Osweiler looks for Hopkins…
But it's going the other way.

The Patriots have the ball on their own 44-yard line.

Tom Brady hit running back James White for a 19-yard touchdown on a wheel route. Brady completed four passes to Julian Edelman on the drive and a 21-yarder to Chris Hogan.

Third quarter, 12:30, Patriots 17-13: Oh man, Brock Osweiler is so bad. If the Texans had a league-average quarterback, they might be winning by two scores right now.

Lamar Miller carried the ball twice for 23 yards on that drive, but Osweiler went 0-of-2 passing.

Kyle Van Noy brought pressure on third down to force the incompletion. Osweiler is 13 of 22 for 83 yards with a touchdown.

Third quarter, 14:07, Patriots 17-13: The Patriots just went three-and-out again to start the second half. Tom Brady was 0-of-2 passing, and Blount ran for 2 yards.

Halftime, Patriots 17-13:  Tom Brady is 8 of 13 for 145 yards with a touchdown and an interception so far. Dion Lewis leads the Patriots with six rushing attempts for 15 yards. Chris Hogan has three catches for 74 yards, while Julian Edelman has two catches for 54 yards.

Halftime, Patriots 17-13:  The Patriots got down to the 1-yard line and couldn’t quite break the plane. They had a first down on the Texans’ 2-yard line. Tom Brady picked up 1 yard on a scramble, then the Patriots couldn’t get in on a pass to James Develin and run by LeGarrette Blount.

The Texans’ defense has been very solid so far.

Second quarter, 5:30, Patriots 14-13: The Patriots were able to pick up a large chunk on a 45-yard prayer to receiver Chris Hogan, who basically caught Tom Brady’s pass like a punt.

The Patriots then stalled and had to punt after Brady was sacked on third down by Whitney Mercilus, who made a nice play in coverage on Dion Lewis earlier in the game.

Second quarter, 7:48, Patriots 14-13: The Patriots responded by forcing their own three-and-out. Logan Ryan had a second pass breakup on third down to halt the drive.

Second quarter, 8:43, Patriots 14-13: The Texans’ defense forced a three-and-out after sacking Tom Brady on third down. It’s amazing the Patriots still lead by a point after the way this second quarter has gone.

We got a game!

Second quarter, 11:20, Patriots 14-6: Dion Lewis’ day just took a turn. He fumbled on the ensuing kickoff, which was recovered by the Texans on the Patriots’ 12-yard line.

Second quarter, 11:36, Patriots 14-6: The Texans moved 18 yards down the field and settled for a field goal. They’re shooting themselves in the foot with penalties. They were flagged for holding early in the drive.

The Patriots turned the ball over on their first play of the ensuing series. Michael Floyd dropped a bad pass from Brady, and it fell into Bouye’s arms. The Texans have the ball on the Patriots’ 27-yard line.

First quarter, 1:00, Patriots 14-3: Well, you won’t believe this, but Dion Lewis just scored the first touchdown on a kickoff return in Patriots playoff history. He took it 98 yards to the house for his second touchdown of the game. He didn’t score a touchdown during the regular season. This is also Lewis’ postseason debut.

First quarter, 1:15, Patriots 7-3: The Texans cut the Patriots’ lead to four points with a 33-yard field goal. The Patriots had ended the Texans’ drive, but cornerback Eric Rowe was flagged for pulling a player off the pile during a scrap. The Texans then drove 45 yards down the field to get into field goal range.

First quarter, 9:27, Patriots 7-0: The Texans did NOT force a three-and-out. The Patriots moved down the field 30 yards on a defensive pass interference penalty by Texans cornerback A.J. Bouye on Chris Hogan. Tom Brady then hit Hogan for a 22-yard completion over Bouye. Brady then chucked a short pass to Dion Lewis, who took it around the left edge for a touchdown.

It was reported Saturday that Denver Broncos cornerback Aqib Talib, a former Patriot, shared his notes on Brady with Bouye this week. They’re not working so far.

First quarter, 10:10: The Patriots forced another three-and-out and a punt. Logan Ryan made a pass breakup on third down while covering Keith Mumphrey. The Patriots have mixed coverages on DeAndre Hopkins early.

First quarter, 11:05: The Texans’ defense responded with their own three-and-out. Tom Brady went 1 of 1 for 6 yards to Julian Edelman. Dion Lewis then carried the ball twice for 2 yards.

First quarter, 13:01: The Patriots forced a three-and-out to start the game. Rob Ninkovich forced the punt with a third-down sack.

Video: Celtics Isaiah Thomas, in his Brady jersey, gets fired up with LeGarrette Blount pic.twitter.com/ZIOsPE1S2q

4:35 p.m.: Some of the NESN crew has arrived at Gillette Stadium for this week’s matchup.

I call this work of art "The Calm Before The Storm" pic.twitter.com/Pg1YA9faYC

The fellas in the trenches are featured on this week's Gameday pic.twitter.com/Nv4M4nEmqs

It’s ra brisk 28 degrees outside. It’s supposed to stay right around 28 degrees all night. The field currently is clear of any players.

?I think he?s [Bill Belichick] the greatest coach of all time. In any sport.? – @DocRivers https://t.co/ig0iyZV0ya

Ahead of tonight's showdown with the Patriots, one Texans defensive back received some help from a familiar face. https://t.co/3osCSOL1F5 pic.twitter.com/jQJaIVYORE

1:35 p.m. ET: Real football officially begins for the New England Patriots on Saturday at 8:15 p.m. ET, when the Houston Texans come to Gillette Stadium for the divisional round of the playoffs.

The Patriots are massive 16-point favorites, and it’s no mystery as to why. They beat the Texans 27-0 in Week 3 of the regular season with rookie third-stringer Jacoby Brissett at quarterback. The Patriots have since improved, with quarterback Tom Brady and running back Dion Lewis returning, while the Texans have made strides on defense.

Patriots rookie wide receiver Malcolm Mitchell was listed as questionable to play Friday, but he reportedly will be inactive. He was the only player listed on the Patriots’ injury report. Texans safety Quintin Demps and outside linebacker John Simon are questionable to play.

That would leave the Patriots a bit shallow in their secondary, but they have plenty of versatility there, since safeties Devin McCourty and Patrick Chung can play cornerback. The Patriots would field four wideouts — Julian Edelman, Chris Hogan, Michael Floyd and Danny Amendola — plus special teams captain/receiver Matthew Slater.

We’re still six hours and 40 minutes away from kickoff. The game airs on CBS. 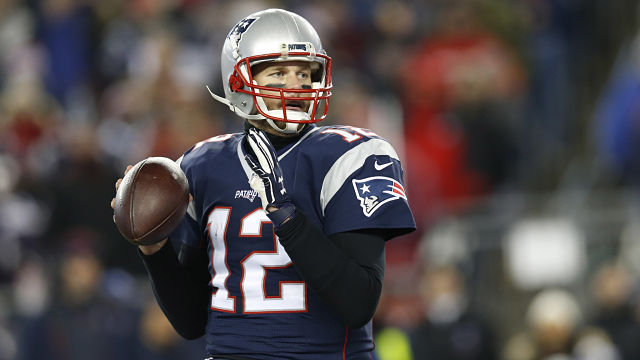 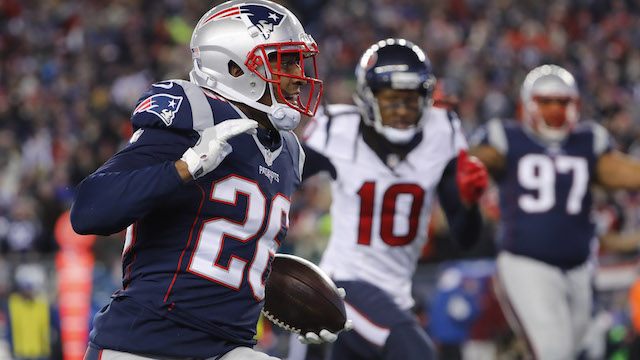