Andrew Benintendi didn’t start the game for the Boston Red Sox on Monday night, but he made sure it ended with them recording their fifth consecutive win.

The Red Sox and Texas Rangers were deadlocked at five in the 11th inning at Globe Life Park when Benintendi strolled to the plate with the bases loaded and one out.

The young outfielder got jammed with a fastball, but was able to muscle it over the head of Rangers shortstop Elvis Andrus to score Tzu-Wei Lin and Mookie Betts, giving the Red Sox a 7-5 victory.

GAME IN A WORD
Uplifting.

The Red Sox had the lead in the ninth inning until Mike Napoli hit a game-tying home run off Craig Kimbrel to send the game into extras, but Benintendi made sure the Sox’s winning streak stayed alive with his 11th-inning heroics.

IT WAS OVER WHEN…
Heath Hembree shut the door in the bottom of the 11th inning.

ON THE BUMP
— Rick Porcello turned in one of his better outings of the season. The Red Sox righty tossed 6 1/3 strong innings, allowing three runs on three hits while striking out three and walking three. He sat down nine in a row at one point, showcasing good sink and command of his fastball throughout the night.

The right-hander’s first-inning struggles continued Monday as the Rangers scored when Porcello spiked a curveball that got passed Sandy Leon, allowing Andrus to scamper home for the game’s first run.

Rougned Odor launched a solo home run to right field in the fourth inning to tie the game at two.

Carlos Gomez blasted a solo home run to center field to trim the Sox’s lead to two in the seventh inning and end the night for Porcello.

— Robby Scott gave up a leadoff double to Shin-Soo Choo in the eighth inning.

— Joe Kelly relieved Scott and gave up an RBI single to Nomar Mazara that cut the Red Sox’s lead to one. The hard-throwing right-hander buckled down, though, as he got Adrian Beltre to ground out and struck out Odor to end the frame.

— Kimbrel gave up a solo home run to Napoli to tie the game in the ninth.

IN THE BATTER’S BOX
— The Red Sox took the lead in the second inning when Dustin Pedroia laced a two-run single to left field to score Sam Travis and Deven Marrero.

— Boston broke the tie in the sixth inning when it loaded the bases with two outs in front of Pedroia. Rangers reliever Tony Barnette got ahead of the Red Sox second baseman, but bounced a 1-2 fastball in the dirt that got away from catcher Jonathan Lucroy and allowed Leon to score. Pedroia shot the next pitch into right-center field to plate Lin and Betts to give the Sox a three-run edge.

— The Red Sox got a rally going in the 11th inning when Lin walked ahead of Betts. Boston’s right fielder followed by smoking a one-out double off the left-field wall to put runners on second and third with one out. After Pedroia was intentionally walked, Bentintendi lifted a two-run bloop single to left-center field to give Boston a two-run lead it would not relinquish.

TWEET OF THE NIGHT
A Benny blooper for the win.

UP NEXT
The Red Sox will continue their three-game series with the Rangers on Tuesday. David Price will take the hill for Boston opposite Yu Darvish. First pitch from Globe Life Park is scheduled for 8:08 p.m. ET. 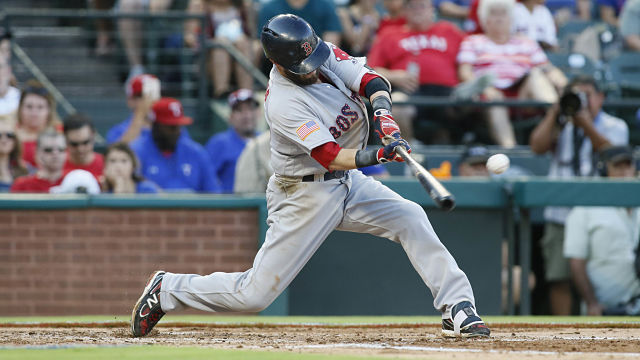 Red Sox Notes: Dustin Pedroia Does It All In Boston’s Win Over Rangers