The last time wide receiver Josh Gordon made a major impact in the NFL, no one had ever heard of Malcolm Butler, Tom Brady was in his mid-30s and the New England Patriots were only three-time Super Bowl champions.

So, yeah, it’s been a while since Gordon, now with the Patriots, led the NFL in receiving yards with 87 catches on 159 targets for 1,646 yards with nine touchdowns in just 14 games in 2013 with the Cleveland Browns. Gordon was just 22 years old at the time and his career was yet to be derailed by suspensions.

Gordon is 27 now and should be entering the prime years of his NFL career. Instead, he was traded by the Browns to the Patriots for a conditional 2019 fifth-round pick.

But what if Gordon really could live back up to that potential with the Patriots? Gordon is under contract for 2018, and he’ll be a restricted free agent in 2019. Without getting into too much detail, that means the Patriots should be able to retain him next season for a reasonable price, or acquire a valuable draft pick in exchange for his services.

So, Gordon could have at least two years in the system to do what he did in 2013. So, what exactly was that?

VALUE
Gordon’s quarterbacks in 2013 were Jason Campbell, Brandon Weeden and Brian Hoyer (also on the Patriots). Overall, their passer rating was 75.7.

Their passer rating on throws to Gordon was 111.3. That rating ranked seventh among qualified receivers, according to Pro Football Focus. Campbell, Weeden and Hoyer’s passer rating while targeting skill players not named Josh Gordon was 65.7.

DEEP ROUTES
Gordon ranked sixth among qualified receivers in deep catch rate, hauling in 41.7 percent of targets 20 yards or more from Browns quarterbacks. He ranked second in receptions on deep targets with 15, fourth in yards on deep balls with 511 and third in deep touchdowns with six. He also dropped three catchable deep balls.

CONCLUSION
Former Patriots quarterback, and 98.5 The Sports Hub host, Scott Zolak pointed out that Gordon played in a system similar to the Patriots’ this year with the Browns. Browns offensive coordinator Todd Haley runs an Erhardt-Perkins offense, which has the same verbiage as the Patriots’. Haley came up under Ron Erhardt, for whom the offense is named, and former offensive coordinator Charlie Weis on the 1990s New York Jets.

That means Gordon could pick up the Patriots’ offense faster than other wide receivers. Gordon won’t immediately come to the Patriots, suit up in 14 games and lead the NFL in receiving yards again. But that’s the potential he possesses. And that’s why the Patriots were smart to take a risk on the troubled wideout. 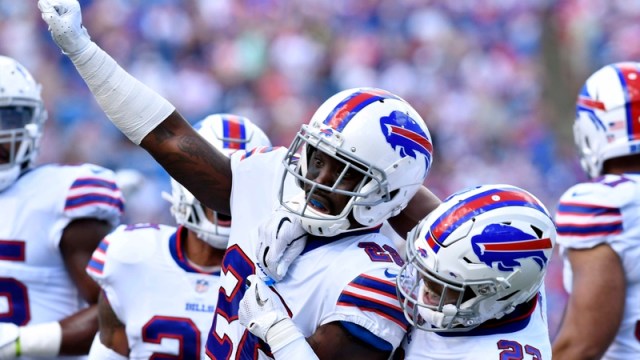