Betts has agreed to a $20 million salary for the 2019 Major League Baseball season, according to multiple reports. The 26-year-old right fielder earned $10.5 million in 2018 and was in his second year of arbitration eligibility.

Mookie Betts settled with the Boston Red Sox at $20 million, league source familiar with the agreement tells ESPN. A huge number that sets a new standard for 4+ players. His number next year, if he doesn?t work out an extension, could be gargantuan.

Major League sources confirm that Mookie Betts and the Red Sox are in agreement on a $20M salary for 2019. That moves the bar for the industry – a huge haul for 2nd-time arbitration eligible player, with a massive $9.5M raise.

Betts can earn an additional $400,000 in incentives, according to USA TODAY’s Bob Nightengale.

Mookie Betts gets $20 million from the #Redsox with 400k worth of potential awards, which he usually reaches

Betts was sensational by every measure in 2018, earning him American League MVP honors. He hit .346 with 32 home runs, 80 RBIs, 30 stolen bases and a 1.078 OPS, all while playing Gold Glove defense for the Red Sox, who won 108 regular-season games en route to a World Series title.

In addition to winning the AL MVP in 2018, Betts finished as the runner-up to Mike Trout in 2016 and sixth in 2017, thanks in large to his ability to impact the game in all phases. He’s earned an All-Star selection in each of the last three seasons and undoubtedly has solidified himself as one of the best players in baseball.

Betts and the Red Sox were unable to avoid arbitration last offseason, and the talented outfielder ultimately won his case. He’ll be arbitration-eligible again next offseason and currently is set to become a free agent after the 2020 campaign.

Betts’ 2019 salary represents a record figure for a player in his second year of arbitration eligibility. It’ll be interesting to see whether Betts and the Red Sox work out a long-term contract extension at some point, but you can bet both sides are keeping an eye on Bryce Harper’s free agency this winter. 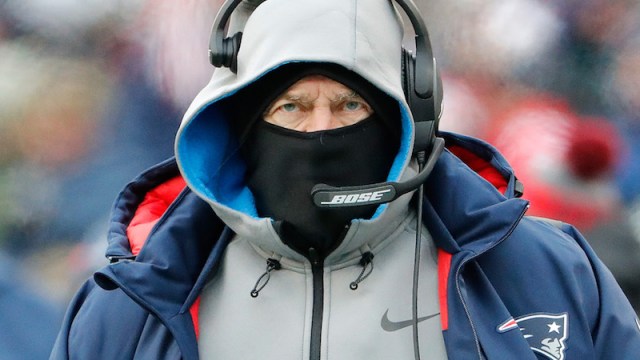 Bill Belichick Downplays Cold, Travel Ahead Of Chargers Game: ‘Not Playing The Weather’

Why Nick Wright Believes Patriots’ Dynasty Will End With Loss Vs. Chargers