At this time a year ago, Tatum was touted as being the next franchise cornerstone of the Celtics. Now, the budding star forward very well could serve as the lynchpin in a potential blockbuster trade that brings Anthony Davis to Boston.

If Davis ultimately does become a member of the C’s, it won’t be until July at the earliest. Thursday’s NBA trade deadline came and went without the New Orleans Pelicans moving the star forward, which sets up the opportunity for Danny Ainge and Co. to make a run at the six-time All-Star this offseason.

Tatum appears ready for trade rumors to resurface this summer, but the 20-year-old admitted it was a sigh of relief that he wasn’t dealt halfway through his second NBA season.

“Yeah. I’m glad to still be on the team,” Tatum said after the Celtics’ last-second loss the Los Angeles Lakers. “I know everybody else was probably watching so I’m glad it’s over with … for now.”

Tatum added: “It feels great. Everybody in here wants to be here and we enjoy playing with each other, being around each other. Hopefully, we just stay healthy and give it our best shot.”

Life can come at you fast in the NBA, and Tatum got his first look of the unforgiving business side of the game probably earlier than he expected.

“It’s new for me, especially when you hear your name in all the rumors,” Tatum said. “But I just focus on what I can control and go out there and play the game.”

Given Tatum’s ceiling, Ainge surely hopes to keep the young swingman in a Celtics uniform for the long haul. But if a Davis trade begins and ends with Tatum, the Celtics president of basketball operations might have to make a tough decision. 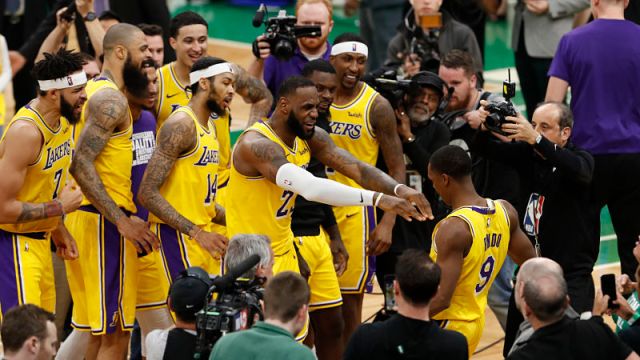 LeBron James, Lakers Must Use Win Vs. Celtics As Fuel To Finish Strong