After falling to the Toronto Maple Leafs 4-1 in Game 1 on Thursday, the Bruins played a much more physical style Saturday night. The B?s were outhit 33-31 in Game 1, but were able to rebound and outhit Toronto 44-39 over the course of their 4-1 Game 2 victory which evened the first round Stanley Cup Playoff series at one.

After the game, Bruins forward Brad Marchand spoke about how the team adjusted after the Game 1 defeat.

?They set the tempo there in the first game,” Marchand said. “They came out hard and played a little more physical than they did in the regular season and we weren?t necessarily prepared for that. I think we were tonight. Things were getting pretty amped up there towards the end of the game, a lot of emotions but that?s what playoff hockey is about.?

?It?s hard to win two games in a row,” Hyman said. “When you lose you get a sour taste in your mouth and you push back and that?s what they did and we?re going to have to do that for Game 3. The series is split, so it?s 1-1 and we?re going home. At the end of the day you flush this one out and move on to Game 3.”

The Bruins and Maple Leafs will take the ice for Game 3 on Monday night in Toronto. 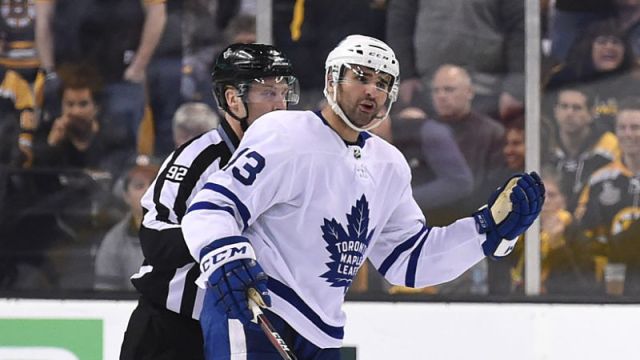