Bruins' Steven Kampfer Gets Job Done In Game 1 With Charlie McAvoy Out - NESN.com Skip to content

BOSTON — Expectation weren’t exactly through the roof for Steven Kampfer, but whatever they were, he exceeded them.

With Charlie McAvoy suspended one game, the oft-scratched veteran blueliner slotted into the Boston Bruins lineup for Game 1 of their Eastern Conference Final matchup against the Carolina Hurricanes. Just minutes into the game, Kampfer opened the scoring, sniping home a wrister from the high slot thanks to a nice pass from Marcus Johansson.

“It was awesome,” Kampfer said of scoring a goal, the first playoff tally of his career. “I don’t know, it’s nice to get a goal, get the lead early. The fans here are awesome, so just to, I guess, hear the crowd after was awesome. (I was) just trying to jumpstart the team, and hopefully they keep it rolling out there.”

Kampfer, who was acquired before the season started in the deal that sent Adam McQuaid to the New York Rangers, has been a true seventh defenseman all season. He played 35 games in the regular season, only getting in when there were injuries, then played Game 3 of the Bruins’ first-round series with the Toronto Maple Leafs before again getting relegated to the press box.

It certainly requires a substantial amount of mental fortitude to get tossed into a conference final after playing sparingly, but Kampfer, in his 14:56 ice time, made his mark. He cited some conversations with teammate David Backes as part of what helped him keep focus.

“I think a lot of it,” Kampfer said, “Like I talked to David before, it’s about keeping your mind in the moment and making sure you’re ready for your next opportunity”

For a player in Kampfer’s situation, the responsibility pretty much is to make sure things don’t get worse when they step on the ice. The 30-year-old is no stranger to his role and what’s required of him when he gets to dress, so he was happy the score came on the first shift.

“Yeah, I think … your first couple shifts you either want to get a hit or you want to make a play,” Kampfer said. “And I was fortunate that was my first shift of the game, I got to make a play. So it was nice, but when it’s all said and done you just want to help the team win, that was the end goal today, and we came out in the third and played really well.”

“Outstanding, for a player that’s been out of the lineup for quite some time,” Chara said. “I’ve been talking about him a couple days ago, he’s always in a positive mindset and he works hard. It’s not easy to come into a playoff game, for a guy like that who’s been out of the lineup for four or five weeks he did a hell of a job and obviously a big goal for us and yeah he played a strong game.”

Bruins head coach Bruce Cassidy offered some interesting insight, noting that Kampfer’s goal probably did more for the team than Kampfer himself.

“Well it’s good more for the group I think,” Cassidy said. “Obviously the individual is happy, don’t get me wrong, but the whole bench — the way our team is constructed and the way those guys want to play for one another, I think it means just as much to the rest of the guys to say, ‘Hey this guy hasn’t played in a while, he’s ready, he’s on time, he catches a pass, he’s not flustered, he zips it in a good spot.’

“So it just tells you that the preparation, and the maturity of Steve too, to be able to jump into that spot and not get flustered,” Cassidy added. “But I think it means just as much, like I said, for the group to know that the next man up (mentality is there). The expression around Boston has been here for a while, and we’re certainly buying into it.”

Now, McAvoy is set to return. And barring any injuries to his teammates, this all but certainly will be Kampfer’s last game this season. It’s a tough spot to be in, but surely he should be able to find peace in the fact that he contributed in a big way when his number was called. 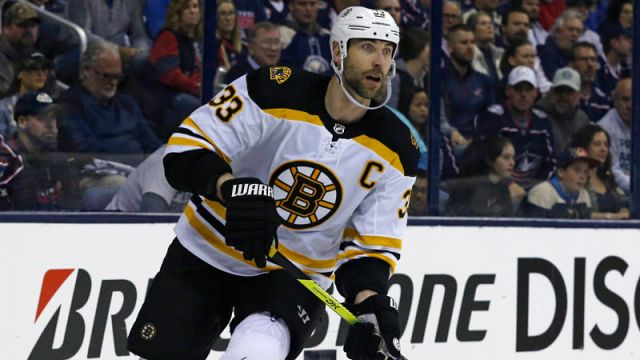 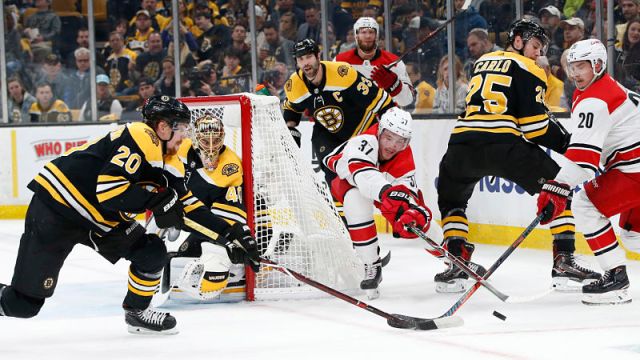 Bruins Notes: If Game 1 Is Any Indication, Boston Has Hands Full With Hurricanes