When baseball’s best and brightest convene in Cleveland on July 9, Michael Chavis just might be among those representing the defending World Series champions.

Just 26 games into his big league career, the Boston Red Sox infielder already is making a compelling case for being a part of the 2019 Major League Baseball All-Star Game. You also could make the case he belongs in the Home Run Derby, but that’s a different discussion.

Chavis finished 2-for-5 with a two-run homer Monday afternoon in his team’s 12-2 win over the Toronto Blue Jays. The rookie now is hitting .296 with nine homers and 24 RBIs since his call-up in late April.

Taking the show north of the border. pic.twitter.com/YcWKMqmjHU

Chavis currently doesn’t have enough at-bats to qualify among the league-leaders at second base (he’ll get there soon), but if he did, he’s be near the top of most statistical categories.

The 23-year-old’s .981 OPS — perhaps the best indicator of overall offensive production — would rank first among all second basemen, as would his .592 slugging percentage and .389 on-base percentage. His .296 batting average would be tied for third highest and his 1.1 WAR would rank as the sixth highest, the latter of which is especially impressive considering he hasn’t as much time as some of his peers to accrue a substantial WAR.

(All stats are per Fangraphs, by the way.)

Chavis’ nine homers tie him for fourth among all second baseman, and his 24 RBIs are tied for the sixth most. Tommy La Stella of the Los Angeles Angeles leads the position with 11 homers, and he’s played in 15 more games than Chavis.

Numbers aside, Red Sox manager Alex Cora has been impressed by Chavis, who also has played solid defense despite beginning his professional career as a left-side infielder.

“Whenever he’s at the plate, we feel like one of the swings he’s gonna hit the ball hard,” Cora said after the game, as seen on NESN’s postgame coverage. ” … He’s been great, controlling the zone … made some adjustments, staying on pitches.

“We like the bat and the quality of the at-bats.”

1 month ago Michael Chavis made his ML debut.

Today he homered for the 9th time. pic.twitter.com/26CbLIrSuq

Whether Chavis eventually makes it to the Midsummer Classic is anybody’s guess. We’re talking about a rookie, after all, so those made-for-Fenway moments could give way to a prolonged slump any day now.

But if the youngster continues performing anywhere near his current pace, it might not be long before he’s mentioned among the top second basemen in the game.

Here are some other notes from Monday’s Red Sox-Blue Jays game:

— Even Chavis’ outs were hit hard.

Chavis just lined out to CF at 112.5 mph, his hardest hit ball in the majors by a wide margin.

— To the say that Boston made more hard contact than Toronto would be a massive understatement.

The 23 hardest hit balls in the game lol pic.twitter.com/vht5P3cJHL

— David Price made his first start since May 2 and pitched well, allowing two runs on three hits over five innings. The left-hander struck out four and walked none. 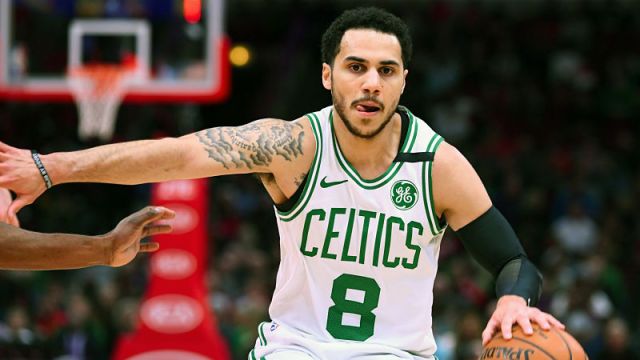