The Patriots selected the former Alabama star with the 15th overall pick in the 2021 NFL Draft, ending a draft-night slide that persisted longer than many analysts had predicted.

Jones — viewed as a potential option for the San Francisco 49ers at No. 3 — brushed off his lengthy wait after New England’s pick was announced, telling NFL Network he’s thrilled to be a Patriot.

“Absolutely,” Jones said. “This is what I wanted all along, and I can’t wait to play for really the greatest franchise in NFL history. It’s going to be a lot of fun, and we’re looking forward to it.”

“I’m just so blessed to be a part of a great organization,” Jones said. “It’s not really where you get picked, it’s what you do with the opportunity. That’s what Coach (Nick) Saban told me, so I’m just going to follow that.”

Saban and Patriots head coach Bill Belichick are longtime friends, and the Alabama program is the premier pipeline for New England draft picks. Belichick has selected a Crimson Tide product in each of the last three drafts and five of the last seven.

Jones led Alabama to a national championship last season. He was asked on NFL Network whether he’ll bring a seventh Super Bowl title to New England.

“We’ll see,” he replied. “I’ve gotten a chance to play under some legendary head coaches, even in high school and with Coach Saban. So I’m looking forward to taking Coach Belichick’s coaching, and it’s going to be a lot of fun.”

In Jones, the Patriots are getting a player they hope will be their franchise QB of the future. He’ll compete with Cam Newton and Jarrett Stidham in training camp this summer.

While not as mobile as this year’s other top quarterback prospects, the 22-year-old Jones fits what the Patriots typically look for in their signal-callers, showcasing his top-notch accuracy and decision-making by completing 77.4 percent of his passes and tossing just four interceptions in his final collegiate season.

“Along the way, a lot of people are going to tell you you can’t do something, and you’ve just got to keep pushing,” Jones said on ESPN. “But we’re just getting started. I’m looking forward to playing in the NFL, and it’s going to be awesome.” 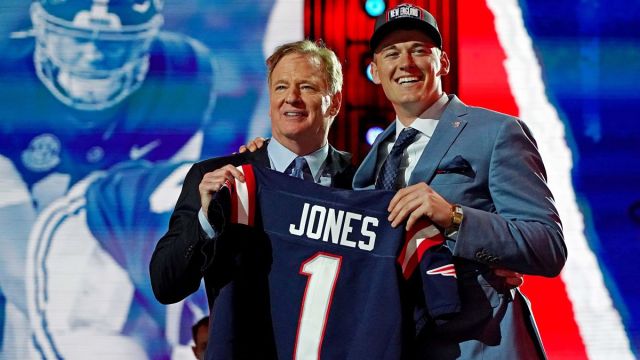 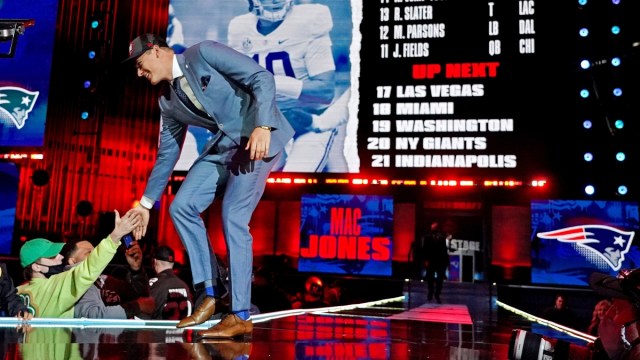