Since signing with the Boston Bruins over the offseason, the winger has been everything he was billed to be. He’s a blue-collar player (as they say) with a rocket shot who also gets to the front of the net. He’s reliable defensively and also widely regarded as a great teammate, even though COVID-19 restrictions have added a hurdle for new players to get acclimated.

Smith had been on a heater in the month of April, but no performance came close to Saturday’s as Smith buried three goals for the second hat trick of his career as the Bruins earned a 6-2 victory over the Buffalo Sabres.

“I think it’s great. He’s a very popular guy in the room,” Bruins head coach Bruce Cassidy said after the game over Zoom. “His kind of lunchpail approach, getting in on the forecheck, creating some turnovers for them and digging around and getting to the front of the net. He has a great shot. They’re happy for him.”

Ever the underseller and team-first guy, Smith’s reaction was a little subdued.

“It felt great. It felt good,” Smith said before launching into praise of his teammates.

Asked though about seeing hats come down for him, he spoke a bit more from a personal standpoint.

“It was cool seeing the hats fly. I don’t get to see it very often for myself, so it was interesting. It was a good time.”

How could it not have been?

Here are some other notes from Saturday’s Sabres-Bruins game:

— Sean Kuraly always has been known for big celebrations when he scores.

Perhaps that’s partially because he seemingly only scores in major situations, and in its own way, that’s precisely what his tally Saturday was.

Kuraly hadn’t scored a goal since Feb. 5, but broke the streak at 16:38 in the first period.

“I think the reaction (to the goal) says it all there,” Kuraly said after a relieved exhale. “Feels good. That’s the name of the game, I guess. There’s a lot of things you try to take pride in, but at the end of the day putting the puck in the net feels pretty good. And you can tell by my reaction how that one felt.”

Although he had been held scoreless, Kuraly was playing a key role lately on a fascinating third line that also included Nick Ritchie and Charlie Coyle, which had been jelling well since getting put together.

— After getting healthy scratched for two straight games, Jake DeBrusk was back in the lineup.

Cassidy had been trying to get his message through to DeBrusk as clearly as he could the last few days. And though the 24-year-old winger didn’t have any points Saturday, he made an impact on the fourth line with Karson Kuhlman and Curtis Lazar. He was playing harder on the forecheck and getting to the net more than he had previously.

“Jake’s been on a lot of lines,” Cassidy said. “He’s been given an opportunity with almost every center iceman here — don’t forget, he was in with Bergy and March, they play a pretty straight line — so it falls on him to play the game that’s in front of him.

“I’ve said it before: To me, it’s a second effort league. If he’s willing to do that, he’ll have success in this league.”

DeBrusk finished with one shot on goal, seeing a healthy 16:53 ice time.

— Kuhlman was a new addition to the lineup, playing in place of the injured Chris Wagner.

He responded by pacing all players with six shots on net in the game, which also marked a career-high for him. He as w 14:49, and delivered a vintage Kuhlman performance that was highlighted by his ability to hunt pucks and forecheck effectively.

“I thought Kuhlman, back in the lineup, did a lot (well),” Cassidy said. “Took it to the net, shot the puck when he had opportunities, cut in and tried to attack the net whenever possible.”

— With the win, the Bruins now take sole possession of third place in the East Division. If the playoffs began today, Boston would face the second-place Pittsburgh Penguins in the first round.

The B’s still have six games to go though, beginning with a back-to-back against the New Jersey Devils on Monday. 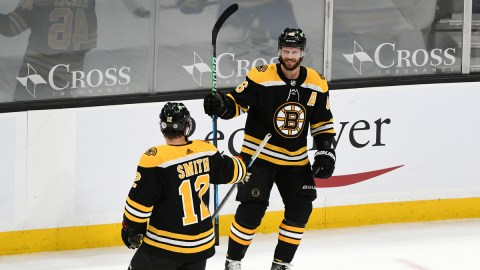 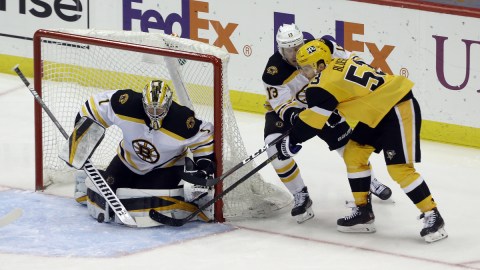 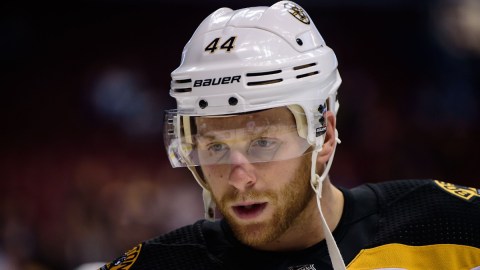