The Red Sox have been hindered by their starting pitching lately, and Saturday’s 9-5 loss to the Tampa Bay Rays revealed not even their interim ace is immune.

Nathan Eovaldi got the start in a must-win game for Boston, and he seemed like a safe option. He entered the night with a 3.49 ERA, the best among the six-man rotation with exception of Tanner Houck, who had a 3.00 ERA in four starts before he was optioned this week to Triple-A Worcester.

The Red Sox split the six-game stretch between starts for Eovaldi (his last one came in a July 24 loss to the New York Yankees,) and in that span, the team’s starters allowed 24 runs through 26 innings — an 8.31 ERA. Eovaldi on Saturday needed to be the hero with first place in the American League East on the line, but instead gave up five runs on six hits through 5 1/3 innings.

“It’s very frustrating to me, especially how big this game was for us tonight,” Eovaldi said postgame. “For the guys to come out and get three runs early for me, then I end up giving up two in the first and then tying it up 3-3, then they end up taking the lead, it was frustrating for me tonight.”

He said he felt he struggled to command his fastball. Data from Baseball Savant shows he had 17 fastballs called as balls. Against the Yankees on July 24, there were just four fastballs outside of the strike zone.

Manager Alex Cora also noted that Eovaldi’s fastball was a big factor in the Rays’ comeback.

“This is a team that is very aggressive in the zone,” manager Alex Cora said postgame. “They got fastballs in the zone and they didn’t miss them. We didn’t play good defense behind him at some point, and when you give the offense more than 27 outs, you keep the line moving, moving, moving, bad things happen. They kept putting pressure on us the whole night.”

Eovaldi’s outing brought the starters’ ERA down to 8.01 through the last seven games. He personally dropped to 3.71 on the season, up from 3.49.

— Jonathan Araúz got the start at second base, a day after he made his first Major League Baseball appearance since May to fill in for Rafael Devers at third base. Cora noted before Saturday’s game that he was impressed with Araúz’s offensive performance, but acknowledged the 22-year-old needed to slow down to prevent defensive errors.

Maybe he missed the message. Araúz made two errors in the fourth inning, allowing Brandon Lowe to get on base then score two batters later when Nelson Cruz reached on an error.

“It sucks, because yesterday he had such a great game defensively at third base and then he has those two plays at second,” Cora said. “Obviously he’s not trying to make errors, but at the same time I know he’s doubting himself. We’ll keep working.”

— Austin Davis, who was acquired from the Pittsburgh Pirates in exchange for Michael Chavis at the deadline, took the hill for Boston in the bottom of the eighth after a rough outing for Adam Ottavino. In his Red Sox debut, Davis gave up a two-RBI single (with runs credited to Ottavino) and a walk, but fanned two to end any further damage.

— Former Red Sox reliever Jeffrey Springs, who has become an integral piece of the Rays’ bullpen, took a scary spill in the seventh inning. He was later diagnosed with a right knee sprain, which was good news after it looked to be worse.

— On a lighter note, Xander Bogaerts made his 1,000th appearance at shortstop, becoming the third player in Red Sox history to do so. Everett Scott (1,093) and Rick Burleson (1,004) are the others.

Bogaerts celebrated in fashion, breaking out of his hitting slump to go 1-for-2 with a two-run home run and a pair of walks Saturday.

— The Red Sox are in second place for the first time since June 26. They will look to reclaim the lead in the series finale Sunday at 7:08 p.m. ET on ESPN. 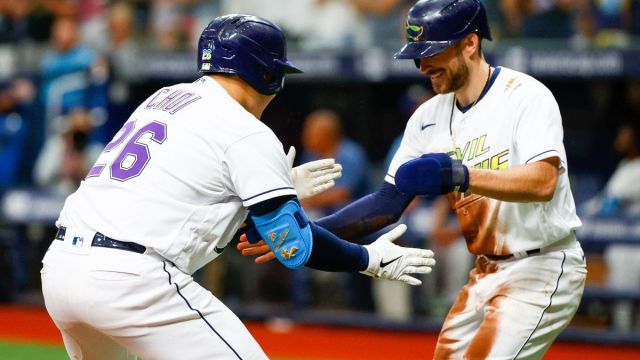 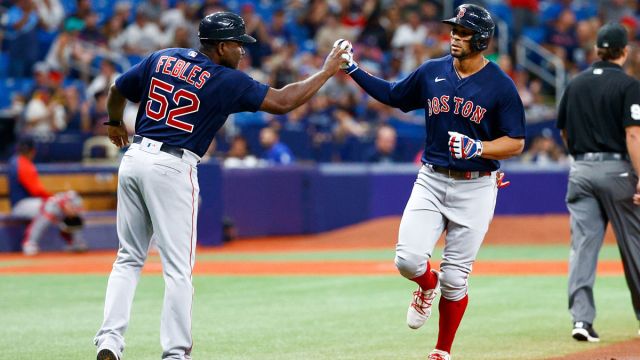