The New England Patriots boasted not one, but two of the NFL’s most productive and efficient ball-carriers this preseason.

Rookie Rhamondre Stevenson and second-year pro J.J. Taylor ranked at or near the top of several statistical rushing categories — both conventional and advanced — over the course of New England’s three-game exhibition slate.

— Stevenson, a fourth-round draft pick out of Oklahoma, led the league in preseason rushing yards (217) and rushing touchdowns (five). He scored twice in each of the Patriots’ first two games — including a 91-yard touchdown in his NFL debut — and once in their third. No other player totaled more than 187 yards or rushed for more than three touchdowns. Taylor was third with 179 yards.

— Stevenson ranked second among qualified ball-carriers in average yards per carry with 7.2. The only player to beat him? Taylor, who averaged 7.8 yards per tote. The next-closest finisher was Houston’s Scottie Phillips at 6.3.

— Stevenson led the league in rushing yards over expected by a massive margin, according to NFL Next Gen Stats. He checked in at +111; Taylor ranked second at +62.

— Among running backs who logged at least 20 offensive snaps in the preseason, Stevenson and Taylor received the highest and second-highest overall grades from Pro Football Focus. Stevenson also led that group in both elusive rating and yards after contact per attempt, per PFF.

As backups to Damien Harris and James White, Stevenson and Taylor played very few snaps against starting-caliber defenders this summer. They’ll face a much stiffer challenge during the regular season. But at the same time, most, if not all, of their preseason carries came behind New England’s backup offensive line, not the rock-solid starting unit that’s expected to be one of the NFL’s best this year.

And the Patriots clearly liked Stevenson and Taylor enough to move on from veteran Sony Michel, whom they dealt to the Los Angeles Rams last week. Head coach Bill Belichick praised Stevenson for his speed and quickness Monday morning.

“We saw some speed in the Washington game, so he’s done a pretty good job with the ball in his hands,” Belichick said. “Ball security is something that every player has to always work on and be aware of. I think he’s improved a lot in his running and also just in general fundamentals and assignments and those kinds of things. He’s had a good camp.”

Taylor, who showed potential as an undrafted rookie last season, is a candidate to fill the Rex Burkhead role as a versatile back who can contribute as a rusher and pass-catcher. He ranked tied for second among running backs in receptions this preseason, catching all 10 of his targets for 62 yards.

“That’s what he’s trying to give us,” Patriots running backs coach Ivan Fears said last week. “He’s trying to give us that look, whether he can do it or not. And I wouldn’t say he’s miles away. I definitely wouldn’t say that. I would say he’s closer than further away. He’s done a hell of a job trying to close that gap. He’s worked his butt off. … He’s got to develop consistency straight through, and I think he can.”

The Patriots currently have five running backs on their 80-man roster: Harris, White, Stevenson, Taylor and Brandon Bolden. It remains to be seen whether Bolden, who did not play in the preseason, will make it through Tuesday’s 53-man cutdown. 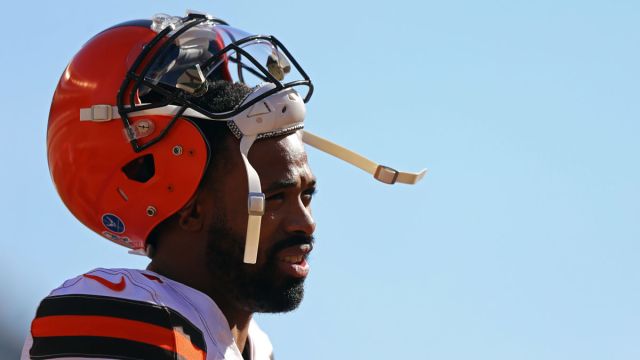