Is Stephen A. Smith Right In Calling Patriots Most 'Dangerous' AFC Team? Skip to content

Are people now getting ahead of themselves with their New England Patriots takes?

Expectations for the Patriots certainly should be adjusted after their 45-7 demolition of the Cleveland Browns on Sunday. New England, now 6-4, is sixth in the AFC and has a legitimate path toward topping the Buffalo Bills for first place in the AFC East.

Mac Jones looked great Sunday; the defense has been embarrassing opposing quarterbacks for a month; and the Patriots now are playing the kind of complimentary, gameplan-driven football they’re known for. But are they Super Bowl contenders?

If you watched some of the morning sports talk shows on Monday, you likely heard an approximation of that take on multiple channels.

NFL Network’s “Good Morning Football” crew suggested the AFC should be afraid of a 15-year, Jones-led dynasty. Colin Cowherd said something about White Claws and the Patriots being the “adults” of the NFL.

And then there was Stephen A. Smith, who, disagreeing with Michael Irvin, labeled New England as the “most dangerous” team in the AFC.

“So, what I’m saying to you is, you purview the landscape in the AFC. OK, Justin Herbert, we ain’t seeing him yet — not in the postseason. And he’s a young quarterback that would be going up against Bill Belichick. Let’s say, for the sake of argument, Derek Carr manages to get there — don’t get me started with him, he ain’t proven to be elite. Let’s say Joe Burrow was lucky enough to get there. We believe in Joe Burrow, but there’s some games where he’s been a little bit exposed. … He hasn’t proven to be elite. Lamar Jackson hasn’t proven to be elite. Ben Roethlisberger is a stationary target. There is no one in the AFC outside of Patrick Mahomes you can definitely say is that dude in the postseason. And, oh by the way, when Patrick Mahomes shows up against New England, he usually struggles against them more than he struggles against anybody else. … I’m just saying, I can’t ignore what I’m seeing from New England right now.”

So, are Smith and his fellow talking heads going too far? Well, it depends on your perspective.

In a vacuum, the Patriots remain a pretty good team with a chance to be even better by the end of the season. Their roster isn’t among the best in the NFL, but their coaching is, and they are solid-to-very good in all three phases. That a rookie quarterback never has led a team to a Super Bowl makes it difficult to envision New England making it to the Big Game in Los Angeles.

However, context matters here. As Smith alluded to, the AFC is wide open this season. Only one AFC team — the 8-2 Tennessee Titans, currently without both Derrick Henry and Julio Jones — has more wins than the Patriots, who, like four other teams, have six victories. The Kansas City Chiefs are one of those teams, but their struggles this season, as well as Patrick Mahomes’s history of struggling against New England, must be taken into account.

At this point, is there any team in the conference you wouldn’t give the Patriots a shot against? We can’t find one. Plus, if New England beats Tennessee and wins its division, it just might claim the top seed in the conference. Remarkably, that scenario is in play.

That said, let’s see how the Patriots look against the Titans and Bills before we crown them. Those two teams are much better than both the Chargers and Browns. Also, whether New England can beat a top-tier team in a close game remains to be seen. Last season’s rain-soaked victory over the Baltimore Ravens really is the only one that qualifies in the post-Tom Brady era.

Getting back to the point debated by Smith and Irvin: The Patriots absolutely are a dangerous team that nobody in the AFC wants to face. But calling them the “most dangerous” is a step too far — for now.

Projecting 2022 Red Sox Rotation: No Shortage Of Options For Boston 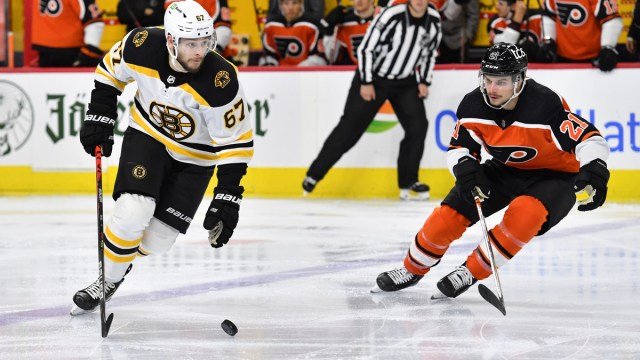